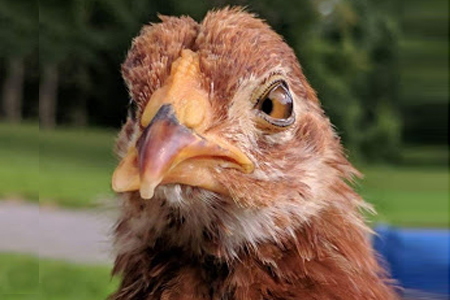 A chicken’s beak is handy for gathering food, drinking water, and exploring and manipulating objects in the environment. It’s also used for preening, nest building, and engaging in social interactions. Occasionally a chick hatches with a deformed beak or develops a deformity as it grows.

One common deformity occurs when the upper half of the beak grows in the opposite direction from the lower half. This condition is known as crossed beak or scissors beak.

A beak deformity may not be readily apparent at hatch but gets worse as the bird matures and its beak grows longer. Causes of crossed beak that appears shortly after hatch include genetics, malposition of the embryo during incubation, and excessive humidity during incubation. Causes of crossed beak that occurs in growing or grown chickens include improper diet, injury, disease, parasites, or tumors.

As a genetic issue, crossed beak is especially common in Ameraucanas and Easter Eggers. It’s a problem breeders have been trying for decades to eradicate without success.

A crossed beak interferes with the chicken’s ability to eat and enjoy other activities that are necessary for its well-being. Depending on the severity of the deformity, the bird may be in danger of starvation.

A chicken with a severely crossed beak may require veterinary attention. It may need to be hand fed for its entire life. Some chickens with crossed beak are able to adapt when fed a moistened ration. If the chicken is picked on by others, it will have to be raised separately from the rest of the flock.

Given a great deal of patience, a baby chick’s beak that is not excessively crossed can sometimes be encouraged to grow correctly. This exercise involves gentle manipulation with your fingers. Apply light pressure to the top half of the beak to move it in the direction that aligns it with the lower half of the beak. Doing this exercise for about 10 minutes, two or three times a day, may help the beak straighten out as the chick grows.

Beak trimming is also helpful, since a chicken with crossed beak can’t handily engage in beak wiping to prevent the beak from overgrowing. The trimming technique is the same as for parrot beak. A crossed beak must be reshaped approximately every two weeks.

Crossed beak is commonly a hereditary condition that can be passed on to a chicken’s offspring. Any eggs the chicken lays (if a hen) or fertilizes (if a rooster) should not be kept for hatching.

2 thoughts on “How to Treat Crossed Beak in Chickens”