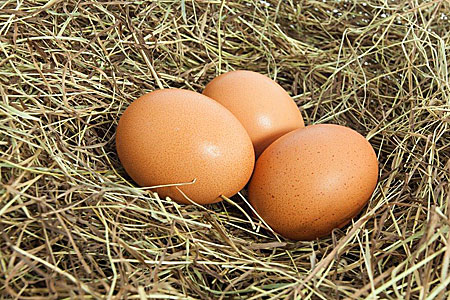 The final step of an egg’s formation inside a hen is the application of an invisible coating. We chicken keepers call it bloom, but technically it’s the cuticle. Bloom consists primarily of 80 to 95% proteins. It also contains polysaccharides (complex carbohydrates that dissolve into simple sugars) and lipids (insoluble oily or greasy compounds).

The first function of bloom is as a lubricant. Once bloom coats the shell, the egg rotates in the hen’s uterus so it will land in the nest blunt-end first. Bloom facilitates the egg’s rotation.

As the egg emerges, the bloom remains wet and somewhat slippery. It may therefore also act as a lubricant to ease passage of the egg out of the hen.

Soon after an egg is laid, the bloom dries. The residue becomes a barrier to the invasion of bacteria and fungi. It works in two ways, physically and chemically.

The function of bloom, from a chicken’s perspective, is to inhibit microbes from interfering with embryo development during incubation. But a too-thick bloom can be detrimental by preventing adequate gas exchange and moisture evaporation.

Bloom quality therefore depends on both its thickness and uniformity of coverage. A hen’s age and strain influences the extent to which bloom covers an egg’s surface. Few shells have 100% coverage.

However, the amount of bloom a hen applies to her eggs is a heritable trait. Therefore bloom (or, more properly, cuticle) is the subject of many recent studies seeking to influence bloom quality in chicken breeding programs.

On an egg with a brown shell, bloom contains up to 20% of the pigment. Most of the pigment occurs on the shell’s surface beneath the bloom.

Pigment on a white eggshell is minimal. But the thickness of the bloom can influence color perception. Some white shells look whiter than others, and some look shinier.

For the same reasons bloom protects embryos before and during incubation, it also prevents egg spoilage. It is especially effective through the first week. If you wash an egg, you wash off the protective bloom that helps preserve the egg’s freshness. The better measure is to keep nest liners clean and collect eggs often enough to prevent them from getting soiled. Then the bloom can do it’s good work of keeping eggs fresh for your table.

1 thought on “4 Functions of a Chicken Egg’s Bloom”