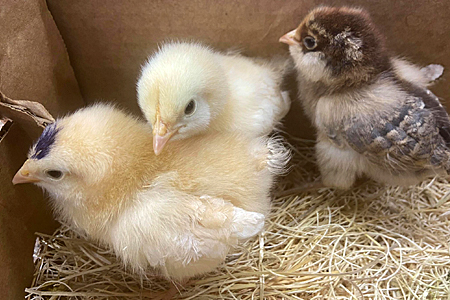 Four traditional methods are used to tell male and female chicks apart. Which method is most appropriate for any specific batch of chicks depends on their breed and variety, their age, and the skill of the observer.

Vent sexing, also called cloacal sexing, is a method of determining a hatchling’s gender by examining minor differences in the tiny cloaca just inside a chick’s vent. Accuracy requires a great deal of training, skill, and keen observation. It is usually done at hatcheries by trained sexers who sort the cockerels (male chicks) from the pullets (female chicks) prior to shipping them to customers.

Vent sexing is not a perfect science and some breeds are more difficult to sex than others. Accuracy is generally about 90%, with a really good sexer hitting an accuracy rate of 95% to 98% on some breeds. Even so, 60% of all chicks are strongly male or female and the other 40% are the sexer’s best guess based on many years of experience. Bantams are usually not vent sexed because they are so tiny and delicate they may easily be injured in the process.

This difference is apparent only up to three days of age. After that, the cockerels’ wing feathers catch up with the pullets’ and they all look alike. Sexing by this method has an accuracy rate of about 99%.

Color sexing takes advantage of sex-link genes that control down and feather color. Both sex-links and auto-sex chicks may be sexed by their color.

Sex-links are hybrid chicks. Most commercial-quality sex-links are either black sex-links or red sex-links. Differing strains of  sex-link chickens are marketed under fanciful names, such as Cinnamon Queen and Golden Comet. Sex-links can be sexed with 99% to 100% accuracy.

Autosex chicks differ from sex-links in being a single breed or variety. Barred and cuckoo chicks, for example, look pretty much alike — black with white spots on the head — but the cockerels are a little lighter in color, and the spots on their heads tend to be irregular and elongated or scattered. The pullets are somewhat darker and their spots are more round and compact. Depending on the breed, autosexing has an accuracy of 80% to 95%.

Sexual dimorphism refers to visible differences that develop between male and female chickens as they mature. At three weeks of age or older, depending on their breed, chicks start developing reddened combs and wattles. The cockerels’ combs and wattles will become larger and more brightly colored than the pullets’. Unless they’re Sebrights or Campines, which are hen-feathered breeds (the males and females have nearly identical plumage), the males will soon develop pointed back and saddle feathers and long tails. By contrast, the hens have more rounded back and saddle feathers and shorter tails.

At about the same time as the cockerels start developing combs and wattles, they make their first squeaky attempts at crowing. When crowing starts in earnest, peck-order fighting gets serious and sexual activity starts. By observing these clearly visible differences, the accuracy rate of sexing increases to nearly 100% as the birds mature.

Until then, telling male and female chicks apart is not always easy. That’s why Cackle Hatchery® places a dot (pictured) on the heads of cockerels for the benefit of customers. After all, who wants to raise a rooster named Gertrude?