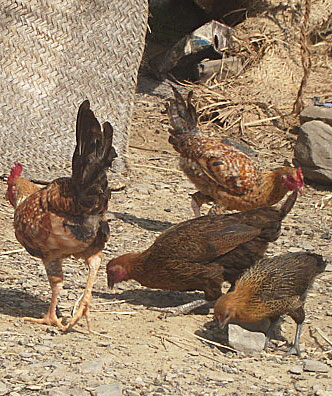 Giving chickens to underprivileged women will lift them out of poverty. So says Pakistan’s Prime Minister Imran Khan, who is getting a lot of flak from his country’s political elite. But consider this: Chickens were once the savior of poverty-stricken rural Americans, according to U.S. Agriculture Secretary Henry A. Wallace (1933-1940).

In the 1900s, when chicken meat experienced a growing demand, rural Midwestern women ran much of the poultry business, explains Andrew Lawler in “How the Chicken Built America.” And, in 1923, an entrepreneurial Delaware woman named Celia Steele instigated what has become today’s multibillion-dollar poultry industry. Look where we are now: Many Americans are prosperous enough to keep chickens solely as pets.

But can backyard chickens make a significant economic impact in poverty-stricken rural Pakistan? Prime Minister Khan thinks so, citing chicken-keeping benefits as nutritious food for eating, and the ability to produce more chickens to have eggs to sell.

“Let’s try giving the chickens a chance,” suggests Myrah Nerine Butt in Pakistan’s leading English-language newspaper DAWN, in an article called “Why PM Khan’s chicken and eggs solution has been mocked for all the wrong reasons.”

“As opposed to a cash handout, chickens are an investment,” argues Butt. “They require low capital and the turnover is high.” Further, “women are likely to retain control of these assets” because chickens are considered to be inferior to the goats, cows and buffaloes tended by Pakistani men. Although rural households can’t hope to tap into the economies of scale that make commercial poultry farming lucrative, eggs could “initially support subsistence of households and provide a steady basic income once the brood of chickens multiplies.” Perhaps more important, village chickens have the potential to increase food security and improve nutrition.

For the scheme to work, Butt points out, supporting infrastructure needs to be established, like training, veterinarian services and access to markets. On the down side, “women might be limited to the role of raising chickens and could be actively discouraged from other activities, like seeking higher education or formal employment.” Another possible unintended consequence, she says, could be a hidden increase in child labor. Her suggestion implies that Pakistani children might not be as enthusiastic as American kids about tending backyard chickens.

Despite all the ridicule, Prime Minister Khan went ahead and initiated his program, according to Kabeer Dawani and Ayesha Mysorewala, in their DAWN article “Imran Khan may have counted his chickens before they’re hatched.” Two-and-a-half million rural women near Rawalpindi, Pakistan’s fourth most populated city, have each received one unit consisting of five chickens, at a cost to the government of Rs1,200 per unit, or about US$8.50.

All of a sudden, say Dawani and Mysorewala, a lot of households within close vicinity of each other are in possession of chickens. The supply of chickens and eggs will therefore drastically increase, making any commercial sales of surplus chickens and eggs difficult, driving down prices and minimizing profits. And then there’s the issue of dealing with all that chicken poop.

Further, since these flocks are expected to multiply, each unit presumably includes a rooster. So far, no one has mentioned the racket raised by 2.5 million roosters crowing in close proximity to one another.

Whatever the outcome, rural Pakistanis are sure to experience the same benefits, joys and yes, hassles, as all the rest of us who keep backyard chickens. 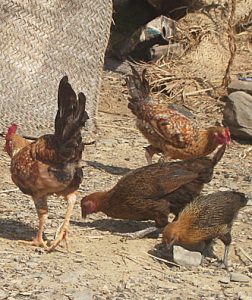