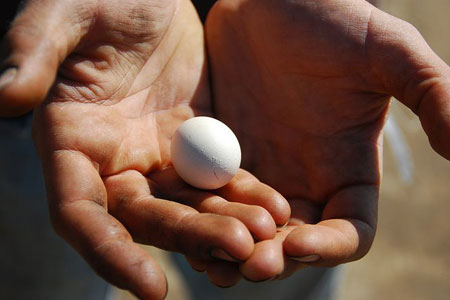 Most chicken keepers know that a hen will lay eggs whether or not a rooster is present. But a rooster is needed in order to get fertile eggs that will hatch. Less well known is that eggs can hatch without a rooster.

Virgin birth, or parthenogenesis, is the process whereby an unfertilized egg develops an embryo. It is a regular means of reproduction in several species of invertebrates, including some reptiles. But it’s not common in birds.

Yet it can occur in turkeys and, though even less often, in chickens. It is more likely in some breeds and strains than in others.

No one knows for sure exactly how common it is. Most parthenogenic embryos die during early incubation and are easily mistaken for fertile eggs that didn’t make it.

In chickens, parthenogenesis has been identified in dark Cornish and, to a lesser extent, in Rhode Island Reds, white Leghorns, and barred Plymouth Rocks. Here are some conditions in which virgin birth may occur:

Four categories of parthenogenesis have been identified in incubated eggs. Oregon State University has posted images of turkey eggs showing all four categories. The first two categories are more common than the latter two:

During incubation, parthenogenesis is difficult to distinguish from normal early embryonic death. But the distinction is important, because evidence suggests that a virgin hen experiencing parthenogenesis and later mated may produce eggs with reduced hatchability. Further, parthenogenesis is heritable, so is passed on to future generations.

The easiest way to verify virgin birth is to incubate eggs from hens that have not been with a rooster. Although the eggs may show early signs of development, they are unlikely to hatch.

The best chance of actually hatching an egg laid by a virgin hen is by incubating Beltsville Small White turkey eggs or dark Cornish chicken eggs. However, should you be so lucky as to get one to hatch, invariably it will be a male.