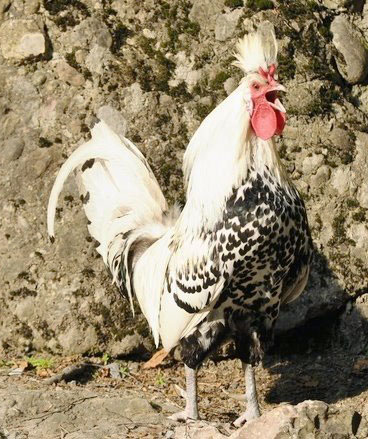 Here’s a common scenario: You cannot legally keep a rooster in your area, so you got sexed chicks that were supposed to be all female. By the time one of them started crowing, and you realized he was a rooster, he had become a beloved member of your family flock. What to do?

It’s hard to hide roosters, because one of their chief characteristics is their loud crowing. Exactly why a rooster crows is a question without a definitive answer, because no one can get into the bird’s mind to find out what he’s thinking.

Thanks largely to circadian rhythm that signals wake-up time, a cock crows most often at the approach of first light, which some people interpret as announcing the dawning of a new day, while others believe the rooster is proclaiming, “I’m still here.” A rooster may also crow during the dark of night, sometimes triggered by the sound of movement or a passing light, such as from a car or a switched-on porch light. He might believe an intruder is approaching, but instead of hushing up and laying low, he puts on a loud show to warn off the intruder.

Cocks crow in the daytime as well, presumably to put potential challengers on notice — a way to assert territorial dominance without engaging in unnecessary fights. When one rooster crows, you can be pretty sure all other roosters within earshot will soon join in.

Decrowing surgery is not a ready answer.

The reason is that, unlike a human, whose voice box consists of vocal cords within the larynx at the top of the trachea (windpipe), the chicken’s voice box has no vocal cords and consists of a syrinx at the bottom of the trachea, where the trachea splits to create the bronchi that go into the bird’s two lungs. In addition to lungs, the chicken’s respiratory system includes nine air sacs. Crowing requires a cooperative effort among the tracheal muscles, syrinx, air sacs, and respiratory muscles. Assuming you could find a veterinarian to decrow your rooster, the operation is expensive, risky, and not always successful.

Caponizing is a type of surgery that severs or removes a cock’s testicles, which are tucked inside the bird’s body. The main purpose of caponizing is to remove a rooster’s sex drive so the bird will put more energy into growing larger. Caponizing is traditionally done when roosters are raised for meat. It is a lot less hazardous than decrowing, but it does render the rooster useless for breeding. At any rate, most people, including veterinarians, find the surgical procedure of caponizing to be just as distasteful, if not downright inhumane, as decrowing.

One way to reduce the sound of crowing is to let the flock out well after dawn, by which time the majority of crowing has already been done. Overnight, either close shutters on coop windows to keep out passing lights, or leave a light on in the coop to reduce the disturbance caused by passing lights. Softly playing a radio helps keep roosters from crowing in response to sounds coming from outside the coop, and insulating the coop walls and surrounding the coop with shrubbery will muffle any crowing that does take place inside the coop.

A so-called no-crow rooster collar limits a rooster’s ability to stretch his neck for an all-out crow, thereby reducing the volume and frequency of crowing. But it doesn’t stop the crowing, and fitting the collar tight enough to discourage crowing without strangling the bird can be tricky. Further, some roosters take grave exception to having a collar placed around their neck. If the rooster doesn’t scratch the thing off, other flock members may oblige by trying to peck it off.

Since a cock stretches his neck to crow, putting him overnight in a ventilated box, pet carrier, or cage low enough to prevent a good stretch will discourage crowing. Covering the container to keep out light also helps. To make the sound of crowing less audible, bring the pet carrier indoors at night and place it in an interior room or in the basement.

Of course, you have to let the rooster out during the day, and he will occasionally crow no matter what. If the rooster is a pet and sending him to Chicken Heaven is out of the question, then your last option is to try to rehome the bird. Rehoming is not always easy, especially where a lot of other people are trying to do the same.

That a sexed chick may turn out to be a rooster is a fact of life in the poultry lane. That roosters crow is yet another fact of life. Being a chicken keeper can entail unexpectedly owning an unwanted rooster, which requires being prepared to choose a humane way to deal with the issue. 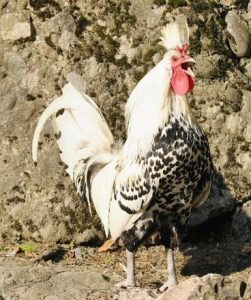