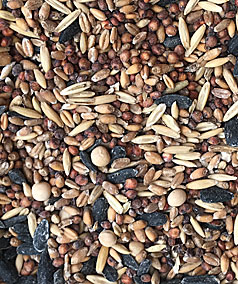 Commercially formulated rations are developed to maximize nutritional benefit based on a flock’s age, beginning with chick starter, then moving up to grower, developer, and lay ration as chickens mature. Meat birds have their own formulas for starter/grower rations and finisher ration intended to induce rapid growth. Aside from different formulas for different age groups, commercial rations come in four basic forms: whole grain, mash, pellets, and crumbles. What’s the difference?

Whole grains are just that — a mixture of unprocessed grains, commonly including corn, barley, wheat, rye, sorghum, field peas, and sunflower seeds. It is usually called scratch grains, or simply scratch. Although it stays fresh longer than processed rations, it is not a nutritionally-complete feed because it does not include all the protein, fats, vitamins, and minerals chickens need. It is typically fed to mature chickens in limited amounts as a treat, or as a winter supplement to help chickens generate warmth. Sometimes some or all of the grains are cracked to make them easier for smaller birds to eat.

Mash consists of crushed whole grains mixed with protein meal and supplemental vitamins and minerals to create a nutritionally-complete ration. It may be formulated as a starter ration that’s easy for chicks to eat, or as a layer ration. It is less commonly available from farm store chains than from local mills that lack the necessary equipment to extrude pellets, and is also the typical form of home-mixed rations.

Depending on the source, the mash is ground to varying degrees of coarseness, but individual pieces still remain recognizable enough for chickens to pick out only what they like. Often what’s left behind is a fine powder that chickens won’t eat at all. This residue often contains much of the supplemental nutrients, which the chickens may be encouraged to eat by moistening the powder with a little yogurt, applesauce, or warm water. To avoid spoilage, moisten only as much at once as the chickens will eat within a short time.

Pellets consist of mash that has been heated and compressed into a long, thin tubular shape, then cut into small pieces. Each pellet has an identical nutritional value, ensuring the chickens get a complete diet because they can’t pick and choose, as they can with mash. Unlike mash, pellets dropped on the ground around the feeding stations may (or may not!) be picked up and eaten.

Depending on brand, pellets come in different sizes. Although they are generally not formulated as chick starter, the smaller size pellets may be formulated for bantams and young chickens as being easier for them to eat than the larger pellets. A disadvantage to pellets is that they take less time to eat than mash, quickly satisfying the chickens’ nutritional needs. If they have nothing else to do, the chickens will get bored and may pick on one another.

Crumbles are pellets that have been crushed, cracked, or rolled into a consistency similar to that of Grapenuts cereal. Nearly any kind of commercial ration may be available as a crumble, including feed formulated for chicks, young chickens not yet big enough to swallow whole pellets, and mature chickens.

An advantage to crumbles over pellets is that they take longer to eat, and therefore the chickens have less time to get bored. The main disadvantage is that crumbles spilled or dropped on the ground are usually trampled and wasted. Dusty residue that accumulates at the bottom of the feeder is also wasted, unless it is moistened and fed in the same manner as mash powder. 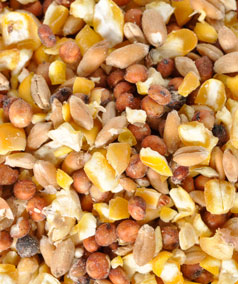