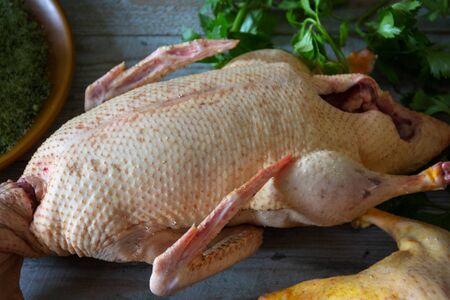 A century ago the goose was considered among the most desirable species of the farm yard, and while many of its traits are still apparent to those who keep them, their popularity decreased as breeding practices for marketability of poultry advanced. Why raise a goose that will be in its prime for cooking in about two to four months when one can choose Cornish Rock chickens and butcher them in approximately six weeks?

Because, if it is butchered before the meat grows tough and roasted to a lovely golden brown, roast goose is one of our most pleasurable culinary delights. There won’t be as much meat as is found on a modern broad-breasted turkey, but what there is will delight the senses far better.

After the goose has been killed, it should be hung to bleed out before proceeding with plucking and cleaning.

Geese (and ducks) benefit from scalding but make sure the water is not hot enough to cook the skin. The water should not reach the boiling point and ideally, between 150 and 160 degrees is enough. Grasp the goose by the feet, plunge it in a very large pot of hot water and bob it up and down a few times, otherwise it won’t penetrate the outer feathers and the reach the feathers underneath. Don’t dip the goose longer than one to two minutes at first. Test a few feathers and they should pull out easily. It is better to re-dip than to leave the goose in the water too long.

Adding a little dish detergent (a tablespoon or two) or even liquid laundry detergent to the water helps the hot water penetrate the feathers on water birds. You may need to flip the goose and dip it in the water holding it by the wings to pluck the last of the feathers. Some people think plunging it into cold water after the hot water dip makes plucking easier.

If dressing poultry often, one might consider making or purchasing an electric plucker.

When pulling out the feathers, be careful not to tear the skin. Take your time and gently pull the feathers rather than yanking on a handful. Once the large feathers are removed the down is much easier to remove. If any pin feathers remain they can be singed, or if the bird is frozen the pin feathers will easily pull out when the carcass is thawed out.

There are stages in the life of a goose or other fowl when the feathers are easier to pluck. Grandpa knew this and strove to butcher accordingly.

Many prefer dry-aged birds, and this may be accomplished by putting the goose in the refrigerator for one to three days before plucking it. The goose may be hung if the temperature isn’t higher than about 40 degrees.

I have read that some Native Americans freeze their water birds with the feathers on and pluck them when they thaw them to cook. I have not tried this, but I do know that the pin feathers are very easy to pull out after the bird is frozen.

After the goose has been cleaned, if bloody areas are off-putting for your family, soak the goose in the refrigerator in salted water overnight. By adding seasonings, the water becomes a brine adding flavor to the meat. This trick will work on any poultry or game. Rinse it, pat it dry with paper towels and season it before putting it in the oven.

If this sounds like more than it’s worth, you can skin the goose and avoid the whole plucking scenario, but you won’t get that lovely roasted skin or the fat that renders out as the goose cooks. That fat is delightful for seasoning vegetables and far too good to waste.

I’m known as the Historic Foodie, so I dare not bid you adieu until we have a look at how grandpa or great grandpa would have viewed killing and plucking of a goose.

“In many parts the head is at once cut off with a chopper so as not to torture the bird so much, certainly the best and most humane way. Pluck the goose as quickly as possible before it gets cold. After plucking, singe it. Then scald it with boiling water and wash in cold and pick it clean. Cut off wings and feet at the joints. Then leave it until it is thoroughly cold and the fat hardened. It is generally left for from twelve to sixteen hours. When it is properly drawn and the fat taken away from the intestines, windpipe and gullet are taken out, the stomach cut off, the thick skin pulled off, the prime fat along the sides and especially the fat of the intestines put into cold water. It is then washed clean and the liver put by separately after the gall has been carefully cut out, so that it does not break and make everything bitter. The wings, feet, neck and stomach are kept for goose-giblets, and the inside of the goose is thoroughly cleansed by washing or scalding…” – Bilz, Friedrich Eduard. “The Natural Method of Healing.” 1898.

Blissful meals®, enjoy your roast goose, and don’t forget the applesauce and stuffing.