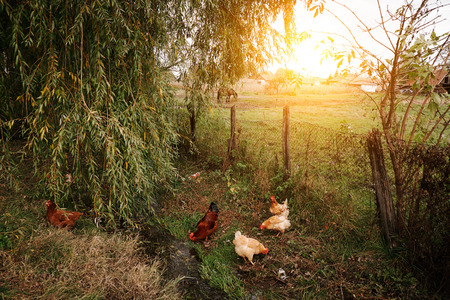 Chemical pesticides might do a fine job of protecting crops from harmful insects, but they can also have a decidedly negative impact on local ecosystems. In recent years, agriculture experts have become especially concerned about the threat chemical pesticides pose to pollinators such as honey bees. That’s why some farmers have begun searching for other means to control pest populations in their crops.

On a small organic vegetable farm in central Missouri, for example, one farmer is using a flock of chickens to keep hungry insects and invasive weeds at bay in his fields.

When Gary Wenig and his wife bought 40 acres of land to start an organic vegetable farm, he quickly realized that organic, nonsynthetic pesticides were very expensive, and potentially just as toxic as their chemical counterparts. So, rather than relying on these store-bought options, he decided to get creative.

He started by planting a series of “trap crops” around the perimeter of his property. As their name implies, these decoy crops are designed to attract harmful insects and keep them away from other harvestable crops. Once the trap crops had been established, Wenig brought out his chicken tractor and let his free range flock feast on the swarm of insects that were drawn to the plantings. This technique not only allows Wenig to save money on expensive pesticides, but on feed for his chickens as well.

In addition to eliminating harmful insects, Wenig also uses his chickens to keep weed populations under control in his fields. Instead of using a series of different sprays to control weeds and insects, Wenig has been able to use his hungry flock of chickens to eliminate the need for both herbicides and pesticides in his crops.

While it might be difficult to employ this technique on large industrial farms, it can work wonders in your own garden at home. You might be surprised at just how many insects a single chicken can gobble up in an afternoon. Rather than using chemical pesticides in your garden next year, try putting your chickens to work instead!

1 thought on “Farmers Use Chickens as Alternative to Pesticides”