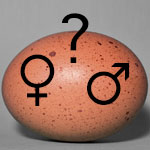 A Minnesota firm has obtained a patent for an incubator that can alter the sex of an egg before it hatches. Naturally hatched eggs result in about 50 percent females and 50 percent males. Anyone who has ever hatched eggs hoping for a majority of laying hens knows the problem — too many roosters.

To separate out the males after they hatch, chicks are traditionally vent sexed. Some autosex breeds have characteristics that readily distinguish the males from the females as soon as they hatch. Crossing certain breeds can also result in clearly distinguishable characteristics. In these cases, though, sorting chicks after they hatch still results in a surplus of unwanted males to deal with.

Over the years, numerous attempts have been made to either sex eggs before they hatch or alter the gender of developing embryos. The most successful methods have involved inserting fluorescent genetic material into eggs to provide markers that allow unhatched eggs to be sorted by gender. Genetic engineering however, is highly controversial among chicken producers and consumers alike.

Once, Inc., a firm that manufactures agricultural lighting systems, has obtained a patent for an LED incubator that can change the sex of an egg  it hatches. “It is very normal process created by nature,” says Once CEO and founder Zdenko Grajcar. “We have targeted light absorption centers in sex-determining genes to either express them or knock them down. In essence, we developed a very simple genetic male/female switch which is based on relatively inexpensive, narrow band light emitting diodes.”

The LED technique may be adjusted to alter gender either way, depending on whether the goal is to produce all females for a layer flock, or all males for fast-growing broiler production. And the gender bending technique works not just for chicken eggs, but for eggs of any egg-laying species. Large scale commercial trials are underway, but exactly when this technology will become available to the public has yet to be determined, as does whether or not such an incubator will be feasible for those of us who hatch chicks from our own backyard flocks and grow tired of being overrun with roosters.