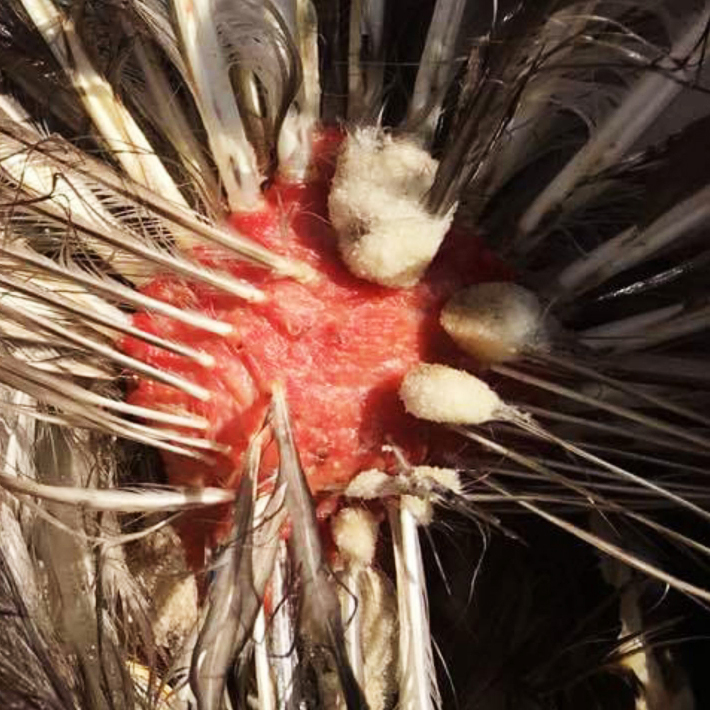 The most common ways chickens acquire lice are from wild birds and other chickens. Once a chicken is infested, lice spread by crawling from one bird to another. Contact with infested feathers, especially during a molt, also helps spread lice.

Lousiness is usually worse in fall and winter. Suspect lice if your chickens are restless, constantly scratching and picking their own bodies. An infested bird can get so stressed it won’t eat or sleep well. Excessive preening results in feather damage. Egg production will drop, and so may fertility. A serious infestation can cause death, especially in young chickens.

Each louse lives for several months, going through its entire life cycle on a chicken’s body. A louse can’t survive more than about a week off the body. The female louse lays her eggs, called nits, on a chicken’s feathers and makes sure they stay there by sticking them down with glue.

Nits hatch in 4 to 7 days. In about a month the new lice are mature enough to start laying nits. They go through one generation in about 3 weeks. In just a few months one pair explodes into thousands, so you can see how quickly a chicken can become overrun with lice.

Each louse species has a preference for feeding on a different part of a chicken’s body, resulting in descriptive names such as wing louse, head louse, and fluff louse. Most lice eat feathers, dried skin, and other organic matter on the skin.

The head louse is the most serious louse pest of young birds, especially in such heavily-feathered breeds as Polish and Cochin. Females lay one egg at a time, gluing it to a feather on the top or back of the head, under the beak, and sometimes on the neck. Head lice spread from a hen to her chicks, causing the little ones to become droopy and weak. Seriously infested chicks may die.

The body louse is the most common one that bothers mature chickens. It lives on the skin of less densely feathered areas of the body, such as around the vent and under the wings. Signs include numerous scabs on the bird’s skin and pearl-colored egg masses at the base of small feathers, typically near the vent. Body lice move fast — when you part a chicken’s feathers, take a quick look before the lice scurry into hiding.

Getting Rid of Lice

Inspect your chickens at least once a month, especially during fall and winter. Most lice that affect chickens are yellow or straw colored. Look for moving lice on feathers and skin, and for white or grayish egg clusters at the base of feathers. If you see lice on one bird, chances are good the entire flock has them, or soon will.

Many products are available for treating chickens with lice, some more toxic than others. One product, promoted as being all-natural, is Manna Pro Poultry Protector. Its active ingredient is potassium sorbate, a type of salt used as a preservative in a wide variety of foods including pickles, bakery goods, and canned vegetables. Inert ingredients are water, yeast, and citric acid.

Poultry Protector is sprayed directly on affected birds, with care to avoid getting any into their eyes. Separate the feathers and thoroughly coat the skin around the vent, under the wings, behind the head, and along the chest. To catch lice that hatch after the first spraying, repeat in one week. You don’t need to spray the coop, since lice cannot live long off the chicken’s body. But you might want to spray roosts to discourage lice from traveling along them from one chicken to another.

Louse infections often accompany poor management and are associated with such problems as malnourishment, internal parasites, and a variety of other infections. Whether louse infestation causes these problems, or these other problems make chickens more susceptible to lice, is arguable. But the fact remains that poor nutrition, infection, worms, and lice are all undesirable.

Along with good nutrition and proper health care, the best way to avoid lice is to prevent their introduction in the first place. The following measures are helpful:

1 thought on “How Do Chickens Get Lice?”