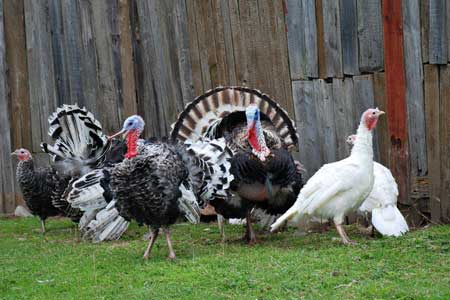 Many turkey breeds are available to choose from. Although turkeys are typically considered to be primarily meat birds, some of the heritage varieties have become popular in the showroom. In selecting the best breed for your particular situation, consider three basic criteria.

A dressed turkey must conveniently fit into your refrigerator while it is aging, and into your oven while it is roasting. If you plan to harvest all your turkeys at once, you also need enough freezer space to store them all; if your home freezer isn’t big enough, you will have to rent a locker.

The other option is to harvest each turkey as you are ready to roast it, which stretches out the amount of time you have to feed your turkeys (therefore the cost of raising them). Plus, the older they get the less tender they become.

Most turkeys raised for meat have white feathers, because white pinfeathers are less visible on a roasted bird. On the platter, a roasted turkey with dark or black pinfeathers doesn’t look so appetizing. Some of the non-white breeds have light colored pinfeathers that don’t show much.

Another color consideration is the amount of white meat a turkey produces. The broad breasted strains have been selectively bred to have a large chest, because consumers have been conditioned to prefer lots of white breast meat.

Industrially produced turkeys are selectively bred broad breasted strains originally developed from standard breeds. The standard breeds, now called heritage breeds, are those that were accepted into the American Standard of Perfection in the late 18th century. The major differences between the two are outlined in our blog, “Differences Between Heritage Turkeys and Broad Breasted Turkeys.”

Broad Breasted Whites were developed by industrial producers for fast growth and a large breast. Today they account for some 90% of all turkeys grown for meat. At 20 weeks of age, hens weigh about 22 pounds and toms weigh about 34 pounds. Although they are suitable for family meat production, BB Whites cannot be used to breed future turkeys because their rapid growth leads to heart problems, and their heavy weight results in lameness and an inability to mate naturally.

Broad Breasted Bronze was the main commercial turkey until the BB White was developed. BB Bronze is hardier, but its dark feathers result in a less clean looking dressed bird. Further, the Bronze is slightly smaller than the White. At 20 weeks, hens weigh about 21 pounds, toms 29 pounds. Like the BB White, this heavy turkey is too clumsy to breed naturally, and artificial insemination is required in order to raise future poults.

Black Spanish turkeys originated in Mexico. They were brought to Europe by early explorers, then brought to the United States by early settlers. Although they have black feathers, they remained a popular meat bird for centuries because of their calm disposition, rapid growth, and early maturation. As with most other heritage turkeys, hens reach a harvest weight of about 14 pounds, toms 23 pounds.

Bourbon Reds are among the older turkey breeds developed in the United States. They are named after Kentucky’s Bourbon County. These handsome, heavy breasted birds have chestnut colored feathers accented in white, and light-colored pinfeathers. They are active foragers and great for pest control. Hens grow to 14 pounds, toms 23 pounds.

Bronze turkeys were developed by early American settlers by crossing Black Spanish turkeys brought from Europe with local wild turkeys. They are the ancestors of the BB Bronze, and look similar, only smaller (hens 14 pounds/toms 23 pounds) and able to reproduce naturally.

Narragansett turkeys were developed in Rhode Island by early settlers. Like the Bronze, these turkeys originated as a cross between Black Spanish and local wild turkeys. They are similar in color to the Bronze but have a steel gray tint in contrast to the bronze’s copper cast. Narragansetts are excellent foragers, have a pleasant disposition, good egg production and brooding instincts, and early maturation. Hens grow to 14 pounds, toms to 23 pounds.

Blue Slate turkeys are named after their attractive color and are popular among poultry exhibitors. Black Slate turkeys come from the same breeding stock but have darker plumage. Slate hens reach a harvest weight of 14 pounds, toms 23. Slates are especially popular among pastured poultry producers, as they are excellent foragers.

Royal Palm turkeys were developed in Florida. They appear to be mostly white until the tom opens his tail to display stunning bands of black feathers. Royal Palms have never been selectively bred for fast growth and heavy muscling, therefore are considered primarily ornamental. But they are a nice size for a small family — harvest weight of hens is 10 pounds, toms 16 pounds. Royal Palms are active foragers and good flyers, important considerations in designing their facilities.

Gail Damerow is editor and principal author of Backyard Homestead Guide to Raising Farm Animals, which includes a chapter on raising turkeys for meat.