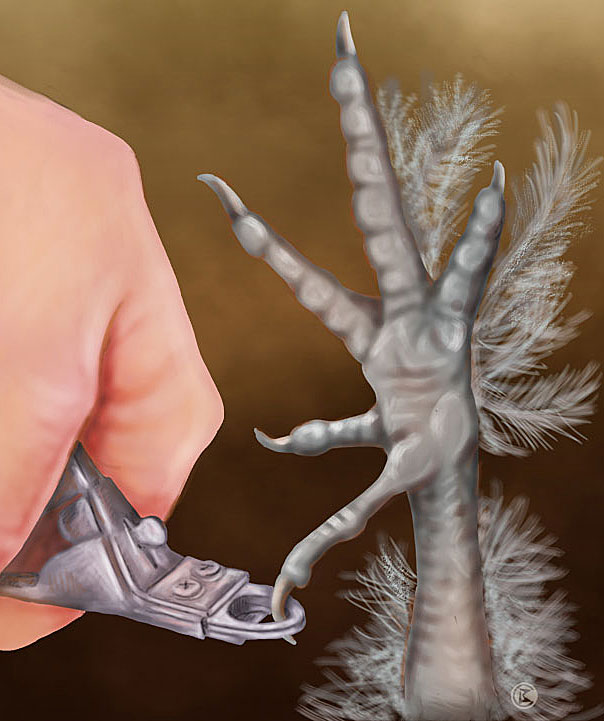 A chicken’s toenails constantly grow, just like a human’s. Unlike a human, though, a chicken can often keep its own toenails trimmed back by scratching the ground while looking for things to eat.

Scattering a small amount of scratch grain or some mealworms on the ground encourages chickens to scratch and keep their nails properly worn down. But when a chicken doesn’t have hard surfaces to scratch against, its nails keep growing. If the nails grow long enough to curl, the chicken can’t walk properly. Without having its nails trimmed, the chicken becomes lame.

Most chickens have four toes. Dorkings, Faverolles, Houdans, Silkies and Sultans have five toes. The extra toe grows above the hind toe and curves upward. Since, in most cases, this fifth toe never touches the ground, it has no opportunity to get worn down.

Nails that don’t wear naturally need to be periodically trimmed. Additionally, roosters may need their claws trimmed to prevent injury to hens during breeding. Chickens groomed for show must have their nails neatly trimmed to successfully compete.

To properly trim a chicken’s toenails, you need to understand a little about how the nails grow.

At the center of each claw is a quick, or soft tissue, nourished by a blood supply. As the nail grows longer, so does the quick. When the nail is shortened, the quick recedes.

Trimming an overly long toenail can result in bleeding, unless the nail is trimmed in stages. Trimming back just a little bit every few days allows time for the quick to recede until the nail is the proper length. From then on, it’s a simple task to keep the nail clipped properly short.

Cleaning a chicken’s feet makes the quick easier to see. Soaking the feet in warm water prior to trimming also softens the nails, making them easier to clip without splitting.

Use a pair of pet toenail clippers or human nail trimmers to snip the nail ends, and finish by filing away sharp corners. To avoid snipping into the quick, trim a tiny bit at a time — no more than about one-eighth inch.

After every snip, inspect the cut end of the nail. If it changes color, you’re getting too close to the quick. Stop trimming and, before continuing, give the quick a few days to recede.

If you should accidentally draw blood, stop the bleeding by applying an astringent such as witch hazel, styptic powder, or alum, or encourage rapid clotting by dipping the wounded toe in flour or cornstarch. If bleeding continues after two applications, apply gentle pressure with the tip of your finger for about a minute, repeating the pressure application until the bleeding stops.

How often a chicken’s toenails need trimming depends on how fast they grow. And their rate of growth depends not only on the environment but also on the time of year; nails tend to grow faster in the summer than during the winter. A good guideline is to trim a chicken’s toenails as often as necessary to keep the nails even with the bottom of the toe. 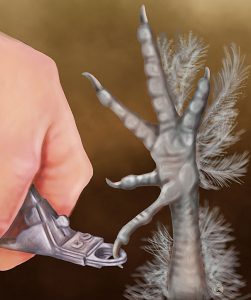