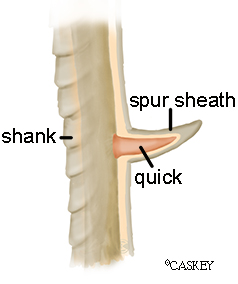 A chicken’s spur is an outgrowth of the leg bone, consisting of soft tissue covered with a protective sheath made of the same tough keratinous material that makes up the chicken’s claws and beak. The spur starts out as a little bony bump. As the chicken matures, the spur grows longer, curves, hardens and develops a sharp pointed tip. Spurs are more common in roosters, although some hens also grow long spurs.

A common way to remove a rooster’s spurs is to twist off the sheath. Jeff Smith of Cackle Hatchery says, “I don’t like pulling off or twisting off a spur sheath. It exposes too much raw sensitive area, still leaves a sharp spur, and can get infected really bad, causing the bird weeks of pain.”

Jeff especially doesn’t like the hot potato method, involving the use of a hot potato to soften the spur sheath before twisting it off. “The hot potato scalds live tissue down into the spur, doing deep spur damage,” Jeff says.

A safe way to trim a spur is to simply remove the sharp tip. Trimming away the end of the spur sheath is easy and does not hurt the chicken in any way. Wire cutters or pet toenail clippers may be used, although clipping may cause the spur sheath to crack. For this reason, many chicken keepers prefer to use a fine-tooth hacksaw or a Dremel cutting wheel, resulting in a blunt spur sheath.

Jeff likes to use a battery-operated reciprocating saw. “I do it at night, so the roosters can go back in their pen and remain still overnight. The spur may bleed some, but will stop. Always make sure the roosters have water available full time.”

This is how to use a battery operated saw to cut Spurs off a rooster.

Removing too much of a spur will damage the quick, or live tissue underneath, causing pain. To estimate how far the quick extends from the shank into the spur sheath, measure the diameter of the base of the spur, where it joins the shank, and multiply by three. For the average mature rooster, the quick ends a little more than half an inch from the shank.

Not all roosters grow spurs long enough to require trimming. As Jeff points out, “Most production-bred chickens do not have spurs.” On the other hand, one of the traits of large Old English game chickens is that hens may eventually develop significant spurs. “We at Cackle Hatchery have not bred that trait out, as we want to continue keeping the original traits and preserve that bloodline,” Jeff says.

Like toenails, spurs continue to grow throughout a chicken’s life. And, just like a chicken’s toenails must be trimmed regularly, long, sharp spurs require regular trimming to keep them short and blunt.