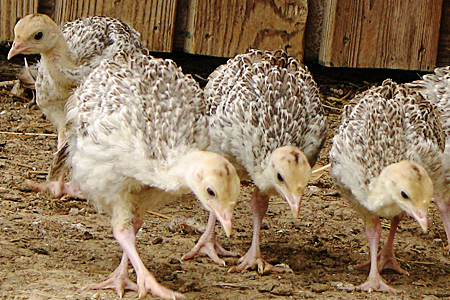 Turkey poults and guinea keets are difficult to sex, and therefore are typically sold as straight run. The males and females of both species, within the same breed or variety, look pretty much alike until they are nearly mature.

As turkey poults grow, you can take an educated guess as to which gender they are, based on a few criteria. Among poults of the same breed, the little hens are somewhat daintier. The little toms (male turkeys) usually weigh slightly more and have slightly larger feet, slightly thicker shanks, and somewhat less feathering on their heads.

A nearly surefire way to tell the toms from the hens is to watch for strutting, which can start at any age. Some toms start strutting just about as soon as they start walking. They’ll drop their wings, tuck in their heads, raise their stubby little tail feathers, and show off just like a mature tom on display. Hens occasionally strut, too, but much more briefly and usually not until they are of breeding age.

Guinea keets are even more difficult to sex than turkey poults. Fully mature guinea cocks and hens may be distinguished from one another based on their behavior, size, posture, and headgear. But these differences don’t become apparent until they are nearly full grown.

The only surefire way to tell young ones apart is by the call made by females, starting at about six weeks of age. Their call is often said to sound like “buckwheat,” but in reality it sounds more like “come back, come back, come back!”

Male guineas never sound this two-syllable call. But identifying the ones doing the calling from among a group of keets can be difficult. However, at about the same time the females start calling, the males’ heads take on a subtle blockier appearance compared to the females’ more refined heads.

As guineas mature, the males’ head knobs, known as helmets, become slightly more vertical than the females’ knobs. And the males’ wattles will be slightly larger, thicker, and wider spread.