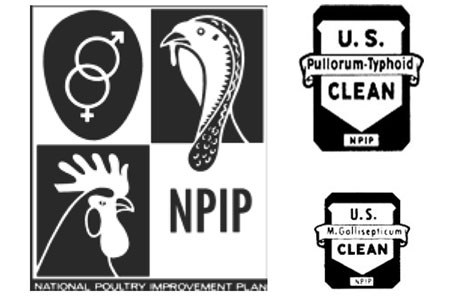 Cackle Hatchery® and Cackle’s Chicken Breeder Farms are members of the National Poultry Improvement Plan (NPIP). But exactly what is NPIP?

The National Poultry Improvement Plan is a nationwide collaboration between state and federal departments of agriculture. Its purpose is to monitor member flocks and hatcheries and certify them as being free of the following serious infectious diseases:
• Avian influenza — a potentially serious viral infection of chickens that can also infect humans
• Chronic respiratory disease — and other infections caused by pathogenic species of mycoplasma bacteria
• Fowl typhoid — an egg-transmitted bacterial disease that kills both baby chicks and mature chickens
• Pullorum — an egg-transmitted bacterial disease that kills baby chicks, as well as hatchlings of many other poultry species
• Salmonella enterica — an egg-transmitted bacterial disease of poultry that can affect humans who eat contaminated eggs

The National Poultry Improvement Plan began in the early 1930s. Its initial purpose was to eliminate pullorum disease caused by Salmonella pullorum. At the time this disease was rampant in poultry flocks, causing as much as 80% mortality in chicks. The Plan now includes other devastating poultry diseases.

Poultry flocks enrolled in NPIP are tested and recertified annually, at the owner’s expense. The exact tests involved depend on both bird species and which program(s) the member enrolls in. The grounds are also inspected to ensure they are clean and conducive to maintaining healthy birds.

NPIP also involves a periodic biosecurity audit. The NPIP member must create a written report of all the specific management practices employed to protect flock health. The report must also explain how these practices are implemented and enforced.