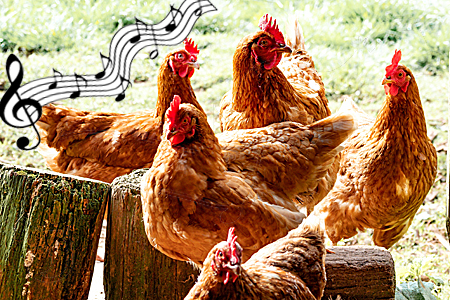 British farmer Glenn Haggart is the latest to discover that playing music for laying hens reduces anxiety and stress, creating a safer environment for the chickens. After four years of playing music for his layers, he’s become a strong advocate. But what kind of music do chickens like?

Let’s start with embryos developing in eggs. In 2002 a group of researchers in All India Institute of Medical Sciences in New Dehli played music for incubating eggs from day 10 through hatch. They found that, compared to natural chicken sounds, music is more effective for brain growth in chicks. The music they selected was sitar.

Back in the 1980s, an animal physiologist who specialized in poultry behavior patented a method for improving the growth rate of broilers. Cornell researcher Gadi Gvaryahu combined music with objects for the chicks to imprint on in an enriched brooder environment. Environmental enrichment, as he defined it, involves increasing the stimulus value of the environment by increasing its complexity. Under his system, Cornish broilers gained more weight during the seven to eight week growth period than a control group on the same amount of feed. Mortality was also reduced in the experimental group, and the broilers were less fearful.

Gvaryahu advocated playing soft, soothing music, such as low level dinner music. “While soft music enhanced the chickens’ growth, loud music would have an opposite effect,” he said. “Vivaldi’s work is just about right in terms of dynamics, rhythm, and the quality of sound. Chickens seem to like classical music better than rock.” The piece he chose, and played intermittently throughout the day and night, was Vivaldi’s “Four Seasons.”

British egg producer Glenn Haggart of Lancashire, under a grant from Innovative Farmers, plays music for his 64,000 laying hens. The layers are housed in four separate sheds, two of which enjoy music.

“They have 25 minutes of music to help wake them up, and in the evening, 40 minutes of music is the signal for them to maneuver onto the perches to sleep,” he said. “Then we play a sort of serene dolphin music whilst they sleep.”

“I haven’t found that music has directly resulted in more eggs,” he admitted. But, he said,“These sounds create a safe environment for the birds in times that they’d otherwise get stressed from adverse noises like lightning, ventilation turning on, or even shadows created from cloud coverage.

“A few years ago, when vets or others visited, the birds weren’t sure of who these strange sounds were coming from, and they’d start cooing from fear. Nowadays, anyone can walk around the shed and the girls don’t mind at all.” He further observed that “as they get older and immunity starts to wear off, being able to instantly relax the birds could enhance and extend their lives.”

As to what type of music works best, Haggart said, “We’ve found that the trick is to make it as varied as possible. Radio works well because it has different types of music, voices and sound effects, whereas if you just use a set playlist on repeat, the birds will only get used to those sounds. We have a playlist overlaid with the sounds of people talking, farmyard noises like tractors, sheep, alpacas, birds and rain sounds — noises that the birds hear day to day.”

Haggart continues to learn “what range of sounds, music and timings calm the flocks down, what stresses them out, and how these affect them in the long term.” He believes that introducing “quiet sounds into nesting boxes could give young birds something familiar to identify with in the new world they’re in. Research also shows that the number of floor eggs reduces when music is played in nest boxes, because sound attracts them there.”

So What’s the Verdict?

The general consensus among various research groups is that chickens favor classical music. However, in 2004 a group of researchers in Spain found that laying hens exposed to Mozart’s String Quartets K428 and K458 became more fearful than hens in a control group.

For any specific type of music to be effective for a non-human species, it “must be in the frequency range and with similar tempos to those used in natural communication by the species,” according to a collaboration among researchers from the Department of Psychology at the University of Wisconsin and the School of Music at the University of Maryland. It is not sufficient, they claim, to simply turn on a radio or play classical music and assume that the species’ acoustic enrichment needs are being met.

To date, no one has identified a single type of music in the frequency range, and with similar tempos, as the sounds chickens naturally make. Further, as Glenn Haggart has observed, “Every flock is different in what they like.” One of his flocks, he says, was particularly fond of Canadian singer Michael Bublé.” Bottom line: The only way to find out what kind of music your own chickens like is to play different music and observe how they react.

Category: Chicken Facts
Tags: Music and Chickens, What Kind of Music Do Chickens Like?

1 thought on “What Kind of Music Do Chickens Like?”