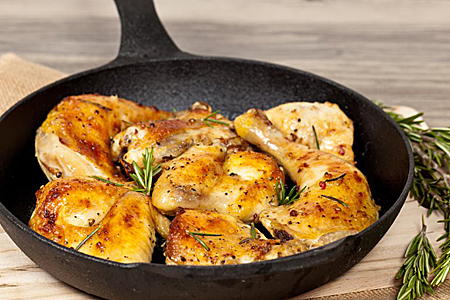 Raising chickens for meat involves first deciding which to choose: Cornish broilers or a heritage breed. The fundamental difference is the amount of time needed to grow them from hatch to harvest. The quicker they grow to the target weight of about six pounds, the cheaper they are to raise and the more tender the meat. The longer they grow, the more flavorful the meat. Let’s take a closer look at specific differences.

• They grow and feather rapidly.

• Chicks of the same age and sex grow at the same rate.

• They consume about 2 pounds of feed per pound of weight gained.

• The edible portion is approximately 75% of live weight.

• They have white feathers for clean picking.

• They have fewer feathers to pick and no hairs to singe.

• Leg and breast meat cook at the same rate.

• The meat is soft and bland.

A significant feature of Cornish hybrids is that they must be butchered as soon as they reach target weight. Otherwise, as a result of their excessively rapid growth, they begin to develop bone ailments and heart failure.

Cornish broilers can be encouraged to forage if introduced to pasture no later than three weeks of age. The energy used while foraging somewhat slows their growth, making them a little less susceptible to leg problems. On the other hand, their white plumage and minimal activity make them vulnerable to predation.

Before Cornish broilers were developed, heritage breed roosters were traditionally raised for meat. Because of their slower rate of growth, they do not experience the same leg and heart issues.

Heritage chickens are instinctive foragers, making them ideal for free ranging. Access to grass results in meat with more omega-3s and other healthful nutrients. And their colored plumage and greater activity lets them more easily evade predators. Here are 10 more characteristics shared by heritage breeds:

• They grow and feather rather slowly.

• Some chicks grow more slowly than others.

• They consume about 4 pounds of feed per pound of weight gained.

• Their colored feathers and hairs are time consuming to pick clean.

• The edible portion is approximately 65% of live weight.

• The meat is lower in fat and firmer in texture.

• The meat is firm and flavorful.

If you have never enjoyed the meat of heritage cockerels, you don’t know what real chicken tastes like. For an economical introduction, consider the Frypan Special, includes a boxful of male chicks in a variety of heavy heritage breeds from Cackle Hatchery® Poultry Breeding Farm. The following outstanding resources offer more information about the delicious differences between heritage chickens and Cornish broilers:

Why Would You Want a Heritage Chicken? (They’re delicious, but misunderstood.)

Why Heritage Chickens Are Slow For More Reasons Than One

How To Cook Heritage Chickens for Real Chicken Flavor