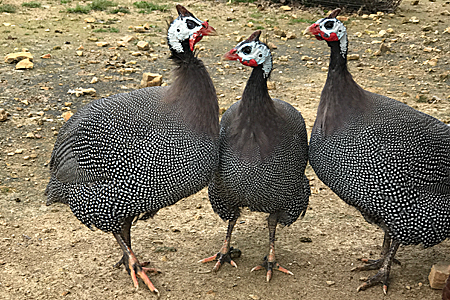 Guinea fowl are notorious for flying away, never to return. The problem is most likely to occur when guineas are moved to a new and unfamiliar location. Guinea fowl can be more easily encouraged to stay on the home place where they are raised. But getting them to stick around is more difficult when they have been transplanted. Here are eight tips for keeping guinea fowl from flying away.

Guineas raised from keets are less likely to fly the coop. As soon as they are big enough to leave the brooder, they should be moved to their permanent coop. Better yet, if at all possible, brood them in their permanent coop from the start. Guineas perceive any change as representing danger. Even moving them from one building or pen to another on your own property can trigger the flight response.

Guinea keets brooded and raised with baby chicks are somewhat calmer and less wild than keets raised only with other keets. And as they mature, they’re more likely to hang around with chickens that have been part of their flock from the start. By the same token, should the chickens later be removed, the guineas may feel the coop has become unsafe, and leave.

Let a Hen Raise the Keets

Guinea keets raised by a broody hen are more likely to remain where the hen lives. Compared to a guinea hen, a good broody chicken is a calming influence and a much more careful mother. A chicken hen is also much easier to move to a brooding pen where the keets will be well protected while they grow.

Get Mature Guineas to Adopt Them

Keets raised apart from mature guineas and then combined into the flock are likely to be considered interlopers and get run off by the older guineas. If you have mature guineas and want to raise more from keets, pen the keets where the grown guineas can visit them and become acquainted while they grow. But feeding and watering the keets can get a bit tricky without being attacked by the mature ones. That’s because, although guinea fowl make careless parents, they are fierce protectors and will even try to protect the keets from you. However, the payoff is that when the keets eventually join the flock, they’ll already be accepted and won’t be viewed as intruders.

Guinea fowl feel safest roosting high up off the ground. Providing high perches inside the coop encourages them to feel safe there. If they feel the perches inside their coop are not high enough, they may seek other roosting spots — one step closer toward reverting to the wild.

Recently purchased growing or mature guinea fowl almost certainly will fly away at the first opportunity. Make sure the newly acquired guineas know where they live by keeping them confined to their coop for at least 2 weeks. Then let out only one. After a few days, let out a second, and so forth. Guinea fowl don’t like to be separated, and the ones that are turned out will stay close to the ones that remain confined and return to the coop at night. If you can’t practically let out one at a time, keep them all confined for at least 6 weeks.

An entirely enclosed run will keep guinea fowl from flying away. If you want guineas to patrol for ticks and other insect pests, remove the cover after 6 weeks. With a little luck, the guineas will fly out during the day, but return to their home to eat, drink, and sleep.

Clipping one wing will prevent guinea fowl from flying away, but the measure is only temporary and must be repeated after each molt. Further, in a run that doesn’t have an overhead cover they could still flap-and-climb their way out. If their purpose is to roam around on tick patrol, they won’t be able to fly away from predators. Besides, guineas spend more time walking than flying. Given the opportunity, they could just as easily walk away as fly away.

The reality is that guinea fowl are not nearly as easily domesticated as chickens. So, despite your best efforts, they just might decide to fly away. Then again, they might not. That’s one of the many fascinating things about guinea fowl.