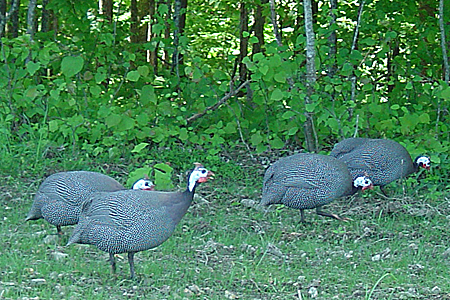 Many rural folks keep guinea fowl primarily to patrol for ticks and any other pesky insects they might snack on. When allowed to roam freely, a flock of guineas will effectively patrol a lawn, pasture, or edge of a woodlot. Just start up your lawn mower and guineas will gather to feast on whatever the mower scares up.

Guineas have long been used to control insects, both in the United States and in their native Africa. But do they really do the job? Not a lot of research has been done on the subject.

In the early 1990s, botanist David Cameron Duffy conducted a research project to determine the effectiveness of guineas in reducing tick populations. He concluded that predation by free-ranging guinea fowl does reduce the presence of ticks and other arthropods.

Why is this important? For one thing, according to the Centers for Disease Control and Prevention, ticks can transmit 16 different diseases to humans, including the one currently of greatest concern — Lyme disease.

Another important aspect is that guineas reduce populations of other arthropods besides ticks. They have voracious appetites for grasshoppers, locusts, Japanese beetles, flies, ants, and other insect pests.  As Duffy pointed out, guineas therefore may be used to help reduce the need for chemical insecticides.

Duffy’s study did not determine the number of birds needed to effectively control ticks. Their cooperative method of hunting suggests you’d need a sizeable flock to patrol a sizeable yard. In short grass, a flock of guineas will line up in side-by-side formation and slowly move forward. When they scare up a grasshopper or other insect, the nearest guineas race each other to gobble it up, then return to their place in the lineup.

Another question is: How many ticks will a guinea eat? Numbers repeated on the internet suggest guineas will eat 4,000 ticks or more in a day. But that doesn’t specify how many ticks each guinea eats or how many guineas it takes to consume 4,000 ticks a day.

Guinea fowl alone should not be relied on for complete control of ticks, Duffy suggests. Instead, they should be used in conjunction with such other measures as the use of repellents and habitat modification. The CDC Tick Management Handbook suggests, among many other things, keeping grass mowed and removing leaf litter.

For the record, chickens also eat ticks and other insects. And chickens, especially the hens, are far quieter than a squawking gang of guineas. But chickens won’t range nearly as far and wide as will a flock of guinea fowl on tick patrol.