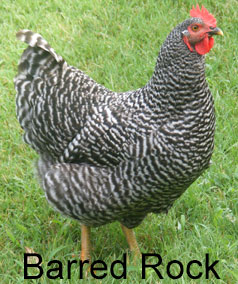 A lot of chicken keepers who are unfamiliar with both barred Rocks and Dominiques have trouble telling the difference between them. Once you’ve seen both, though, you’ll have no trouble readily identifying which is which.

First let’s get one thing straight: “Barred Rock” is not a breed. The breed is Plymouth Rock. The original color variety is barred. Other, newer, varieties of Plymouth Rock are blue, buff, columbian, partridge, silver penciled and white. Dominiques, on the other hand, come in only one variety. When we say, “barred Rock,” we are referring to the barred variety of Plymouth Rock.

Both the barred Rock and the Dominique are dual purpose — meat and egg — chickens. Both are heritage breeds, having been admitted to the American Standard of Perfection in 1874.

The Dominique, however, is the older of the two. The Dominique, in fact, was used in the development of the barred Plymouth Rock. No wonder it can be difficult to tell them apart. Let’s take a look at the differences.

The quickest way to tell whether a mature chicken is a barred Rock or a Dominique is to look at the comb. The barred Rock has a straight comb. The Dominique has a rose comb with a spike — a narrow, pointed extension sticking out at the back.

The color patterns look similar, but are not the same. Barred Rocks are, well, barred. Dominiques are cuckoo. The barring pattern results from straight lines of alternating black and white bars of roughly the same width. In cuckoo, the bars are more irregular or jagged — more of a V shape than straight — and the dark bars are more gray than black, creating a mottled appearance that is less sharply distinct than true barring.

If you were able to see a barred Rock and a Dominique, of the same sex and age, side by side, the barred Rock is larger, heavier and blockier. The Dominique is slightly smaller, carries itself more upright and has a more refined head. The Dominique rooster has a longer tail than that of a barred Rock, and the sickle feathers are wider.

Both barred Rocks and Dominiques are often colloquially called Dominickers or Domineckers. Both were once commonly found in farmyards, and still make wonderful backyard chickens today. For pets or for show, Cackle Hatchery offers smaller versions — bantam barred Rocks and bantam Dominiques.

2 thoughts on “What’s the Difference Between a Barred Rock and a Dominique?”