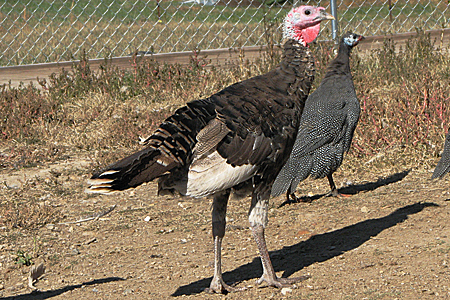 Wild turkeys, indigenous to the Americas, were kept by Native Americans for centuries before the arrival of Europeans. Early Spanish explorers are credited with transporting American turkeys to Europe.

There the birds were selectively bred for a couple of centuries before being brought back to America by early settlers. From those birds sprang the domestic turkeys we know today.

So, if the bird is indigenous to the Americas, and not Turkey, why do we call the turkey a turkey? No one knows for certain, but everyone has a theory.

Another theory is that a Native American word for the bird is firkee, which early settlers heard as “turkey.” How that one got started is anyone’s guess. A review of languages of eastern tribes reveals lots of words for turkey, but no firkee: Powhatan (Virginia) — monanow; Delaware — tshikenum; Algonkian (Long Island) — nahiam; Narragansett (southern New England) — nahenan; Natick and Wampanoag (Massachusetts) — neyhom; Abnaki (Maine) — nahame; Iroquois (upper New York) — netachrochwa gatschinale.

Yet another explanation is that Christopher Columbus, on his expeditionary voyage to discover a northwest passage between India and China, saw wild turkeys when he landed in America. Because Columbus thought the New World was connected to India, and because peacocks are indigenous to India, and because the male turkey, like a male peacock, displays his colorful tail to attract a mate, he called turkeys by the Indian word tuka, meaning peacock.

However, India has more than 22 official languages, and it’s not clear in which one of those languages a peacock is called tuka. Further, Columbus is known to have spoken (or at least written in) Portuguese, Spanish, Latin, and Greek, but there’s no evidence he spoke (or wrote in) any of the 22 Indian languages.

Another hypothosis is that, in the 1500s, when the American bird was first imported into Great Britain, it got there by way of Constantinople and therefore was called a “Turkey coq” (coq being the French word for fowl.) According to the late linguist Mario Pei, the British so-named other items delivered by Turkish merchants: they called Persian carpets “Turkey rugs;” Indian flour was “Turkey flour;” Hungarian carpet bags were “Turkey bags.” Eventually “Turkey coq” was shortened to “turkey.”

Interestingly, the Turks call a turkey hindi, in reference to India. In several other countries, the name for a turkey takes some form of “bird from India.” However, in India a turkey is called by its Portuguese name Peru, in reference to the South American country.

One of the most common, and perhaps most likely, explanations is that it was a simple case of mistaken identity. Guinea fowl were once popular meat birds in Europe. Like many other foreign goods, they were brought to England by way of Constantinople, and so the British referred to them as turkey fowls. Early British settlers, who had grown used to the “turkey fowl” of Europe, thought the turkeys they saw in American woodlands were a type of large guinea fowl.

Even today people who are unfamiliar with guinea fowl often believe they are some kind of turkey. The two do sort of look alike, as seen in the above photo. So, although eventually it became apparent that guineas and turkeys are only distantly related, the die was cast and still to this day we call the turkey a turkey.

Gail Damerow is editor and principal author of Backyard Homestead Guide to Raising Farm Animals, which includes a chapter on raising turkeys.

2 thoughts on “Why Do We Call the Turkey a Turkey?”