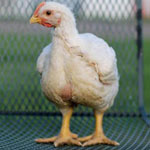 As if you needed one more reason to grow your own chicken meat, here it is — woody breast, defined as a hardening of breast muscle, resulting in stiff wood-like fibers that make the breast meat difficult to chew. Woody breast is one of three breast meat myopathies (muscle diseases) that plague the poultry industry, the other two being green muscle disease and white striping.

Green muscle disease has been recognized since the 1970s. White striping and woody breast were first reported earlier this decade.

In March 2016 the Wall Street Journal brought public attention to woody breast, prompting the National Chicken Council to post a page on their website stating that the cause of woody breast is unknown, and that the industry is engaged in research to determine causes and solutions. Both reports pointed out that woody breast is not a public health issue.

Most sources agree that woody breast results from the unusual rapid growth of industrially produced broilers. A report in the December 2015 issue of Poultry Science concluded that breast meat myopathies are only marginally related to genetics and that woody breast may be controlled through proper management and nutrition.

Those of us who grow our own chicken meat rarely see woody breast and other myopathies, even when we grow the same type of chickens that are used for industrial production — the Cornish Cross. This chicken is bred from a cross between commercial strains of white Cornish and White Rock chickens. Homegrown Cornish Cross chickens are great for broiling and barbecuing, and when roasted whole they make an ideal alternative to turkey.

For free ranging, the Red Broiler is more suitable both because it forages more actively than the Cornish Cross, and because its red feathers make it less visible to predators compared to the white Cornish Cross. Red Broilers don’t grow as fast as Cornish Cross chickens, therefore they don’t experience the same skeletal problems related to too-rapid growth, and they have a greater proportion of dark meat to white meat.

By properly managing your homegrown broilers to minimize stress and by providing them with a healthful diet, you can enjoy the best tasting chicken on earth. And you needn’t be concerned about the possibility of serving woody breast meat at your family table.