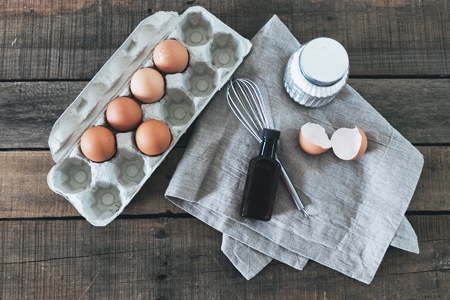 Perhaps the greatest tribute to eggs is the vast number of ways they are incorporated into recipes around the world. Many recipes call for eggs as a functional ingredient, used to perform such services as binding other ingredients together, clarifying liquids, or causing baked goods to rise. Here are 15 functional properties of eggs in recipes and how they work:

A binding agent is an ingredient that helps keep a mixture together, so the dish holds its shape. As the dish cooks, the egg proteins set to provide strength and stability, keeping otherwise crumbly ingredients from falling apart. Recipes in which eggs are used as a binding agent include cookies, cakes, burger patties, meatloaf, and some casseroles.

As a clarifying agent, eggs trap loose particles in a liquid, causing them to either fall to the bottom or float to the top. When the egg-laden particles are strained or filtered out, the liquid becomes clear. Recipes in which eggs are used as a clarifying agent include jellies, red wine, soup stock, and coffee.

The function of an emulsifier is to stabilize a mixture of incompatible liquids, such as water and oil. The lecithin in an egg’s yolk surrounds oil particles to form a film that prevents the oil particles from sticking together and separating out. Recipes in which eggs are used as an emulsifying agent include salad dressing, mayonnaise, hollandaise sauce, and crème brûlée.

A leavening agent is an ingredient that causes a mixture to rise or puff up. Whipped egg white incorporates air to form tiny bubbles that expand when heated, thus providing a light, airy structure to baked goods. Creaming whole eggs together with butter and sugar also creates air pockets that serve as a leavener. Recipes in which eggs are used as a leavening agent include angel food cake, sponge cake, meringue, souffle, sabayon, and gluten-free baked goods.

Another way eggs leaven is by creating steam when heated. Baked goods that rely on steam for rise tend to be hollow inside. Recipes that rely on eggs to produce steam include cream puffs, eclairs, and popovers.

When heated, egg proteins set into a thick but smooth network that holds moisture, making eggs ideal as a thickening agent. Recipes the use eggs as a thickener include custards, curds, pastry creams, and cream pies. Eggs are also used to thicken mixed drinks such as eggnog and advocaat.

Besides increasing tenderness, moisture trapped by egg proteins and fats in baked goods helps delay staleness. It also keeps goods from being too dry and crumbly and inhibits the growth of mold. When a wheat-based recipe is converted to a gluten-free recipe, adding extra yolks or whole eggs improves moisture retention.

An egg glaze, or wash, puts a glossy shine on the surface of baked goods. Whole egg — or egg yolk mixed with water, milk, or cream — brushed on cookies and breads before baking produces an attractive glaze. Whisked egg whites alone will lend a shiny finish to pie crust.

Besides looking nice, a shiny finish on bread creates a crust that helps minimize the absorption of moisture. Baking a glazed pie shell before adding the filling seals the crust to keep it from turning soggy. Dipping fritters in beaten egg before frying them seals the surface to keep the fritters from absorbing oil.

An egg wash may be used to glue down the edges of pastries. The egg solidifies during cooking to bond the surfaces together. Without the egg glue, steam may cause the edges to pull apart during cooking. Recipes that use egg to glue parts together include double-crust pies and decorative pastry pieces on the top crust, turnovers, empanadas, and a variety of en croûte dishes.

Another way egg wash is used as glue is to stick toppings to the surface. Examples include gluing seeds or grains to the surface of bread, sticking chopped nuts or sprinkles to the tops of cookies, and applying a bread crumb coating to chicken, fish, and other meat.

In a variety of desserts, eggs are used to control crystallization, resulting in a smoother, creamier texture. In sweets, egg white protein reduces the number and size of sugar crystals. In ice cream, egg yolk fat similarly minimizes the formation of large ice crystals. Examples include royal icing, and gelato.

The fats in egg yolks carry other flavors to contribute richness to baked goods, custard-based ice cream, and other foods. The mouthfeel contributed by egg yolk fats is also responsible for enhancing flavor.

Hard cooked eggs often serve as a garnish on a tossed salad or a bowl of potato salad. Instead of being simply chopped or sliced, they may be attractively shaped into heart, floral, or wavy patterns.

Using eggs in recipes contributes healthful monounsaturated and polyunsaturated fats, as well as all nine of the essential amino acids the human body can’t produce and therefore must derive from foods. Eggs also contain several vitamins that contribute to good health. So break out the eggs and get cracking,