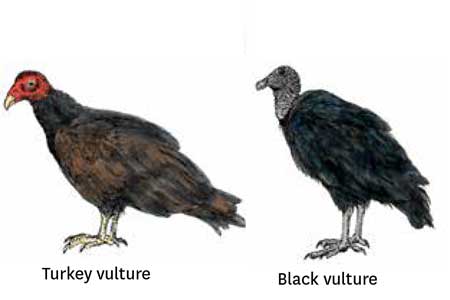 Vultures are often blamed for killing chickens that were already dead when they got there. Vultures are primarily scavengers. They subsist mainly on animals that have been dead for two to three days.

A vulture is a large, black raptor with an exceptionally wide wingspan. It flies in large, languid circles while seeking something to eat. You are most likely to see them in flight during the early part of the day, up until about noon.

Vultures have weaker feet than most other raptors. They therefore are less able than hawks or owls to kill or carry live prey. On the rare occasion when a vulture does kill — which is most often when it can’t find anything to eat that’s already dead — it targets a seriously ill or injured animal that makes easy pickings.

The vulture’s beak is stronger than that of most other raptors, making it able to rip into tough hides. The vulture also has a bald head and neck, which gets less messy than would a feathered head poking around inside a rotting carcass. Vultures have strong enough stomach acids to destroy any botulism toxin or infectious bacteria that may be present in rotting meat.

Unlike most other birds, North American vultures do not have a voice box. They make hardly any noise, except for raspy hisses.

When most people refer to a vulture, they mean the red-headed turkey vulture (Cathartes aura). Colloquially known as a buzzard, it ranges throughout the United States and into southern Canada. Turkey vultures roost in large groups at night, then break up to hunt independently during the day.

They are the big black birds you are most likely to see cleaning up roadside kills. They find dead animals by flying low and using their excellent eyesight to spot a carcass, along with their outstanding sense of smell to detect the aroma of gas emitted by rotting flesh.

In flight, the turkey vulture tilts back and forth as it glides gracefully on long narrow wings, which can have a span of up to 6 feet. Rarely does it flap. When it does flap, the wing beats are slow and lazy.

The North American black vulture (Coragyps atratus) is smaller than the turkey vulture and inhabits the southeastern United States. It may be distinguished from the turkey vulture by its black head, shorter tail, and short, broad wings with a span of only about 5 feet.

The black vulture flaps its wings more often than the turkey vulture. Each series of snappy wing beats is followed by a short glide. The tips of its wings end in silvery feathers, much like the fingers of a pair of white gloves.

While the black vulture eats mainly carrion, it is more likely than the turkey vulture to pilfer eggs or kill newborn animals, including baby poultry. It does not have the same keen sense of smell as the turkey vulture. To find a meal it must either rely on its good eyesight or else travel with turkey vultures.

Whereas the turkey vulture tends to hunt alone or in twos or threes, black vultures hunt in larger flocks that sometimes include turkey vultures. When chicken is on the menu, it more likely than not was killed by some other poultry predator.

Nevertheless, vultures that get caught in the act often take the rap. Instead we should be happy that vultures clean up the mess other predators leave behind.

Gail Damerow is author of the poultry predator detective manual What’s Killing My Chickens?, source of the accompanying vulture illustrations.