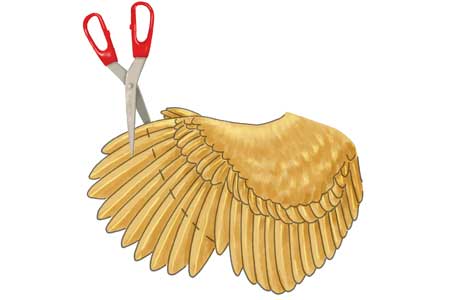 A chicken — or any other poultry — that persists in flying out of its enclosure can be an annoyance. It may destroy vegetable gardens and flower beds (yours or your neighbor’s). It may get into the wrong pen and mess up your breeding plan. Worse, it could get run over on the road or nabbed by a passing predator. Knowing how to clip a chicken’s wing feathers not only will save you aggravation, it may save your chicken’s life.

A bird that can still fly after having the primary fight feathers clipped may need to have the same wing’s secondary feathers clipped. If that still doesn’t do the trick, more severe trimming may be necessary. But never cut the feathers shorter than one inch from the wing, which is about to the tips of the coverts.

If you need to trim more than one chicken, clip the same wing on all of them. Otherwise you may end up accidentally trimming both wings on the same bird. A bird with both wings clipped can’t fly as well as a bird with neither wing clipped, but it can fly better than a bird with one wing clipped.

Clipping should be done only after the flight feathers have fully emerged and the blood has receded, leaving the quills hollow. To identify young blood feathers, spread the wing and inspect the underside for soft, pinkish, immature shafts. To prevent excess bleeding, delay clipping until all the feathers are fully mature.

Clipping lasts only until new feathers grow during the next molt. So it may need to be repeated in only a few months in young a bird or up to a year for an older bird.

A problem with clipped feathers is that they don’t always readily fall out for the molt. In that case, you may need to remove the balky ones before new feathers can grow in.

Heavier breeds sometimes fly while they’re young and lithe, but rarely continue after they’re fully mature. Brailing is a good alternative to wing clipping when you need to control a young bird that will eventually grow too heavy to fly. It’s also an option for show birds when you don’t want to mar their appearance by feather clipping.

Brailing involves wrapping one wing with a brail, which is simply a piece of soft cord or strap. The idea is to confine the wing so it can’t fully extend for flight.

At least once a week, the brail must be moved to the opposite wing. Doing so ensures the brail doesn’t become too tight and also lets the bird exercise its wing muscles so they don’t atrophy. For detailed illustrations on tying a brail, click here and search or scroll down to “how to make a brail.”

Neither clipping nor brailing is a suitable option for free-range chickens. Free rangers need full flight capability in the event they are stalked by a predator.

Although clipping is more common than brailing, it should be used as a last resort for a chicken that can’t be confined by any other method. Sometimes all that’s needed is a higher fence or some lightweight netting secured across the top of the pen.

Gail Damerow is the author of Storey’s Guide to Raising Chickens, source of the accompanying illustration.