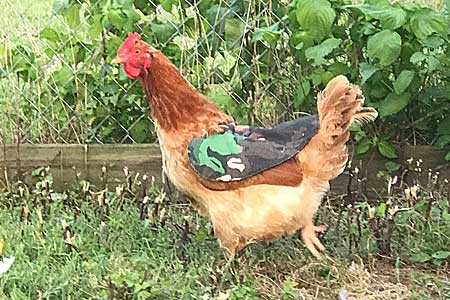 A rooster intent on mating a hen grabs the feathers on her head with his beak while he attempts to stand on her back. To get a good grip, he braces his claws against her shoulders. More often than not, his feet slide on her smooth feathers and — to get better balanced — he makes a few quick movements of his feet. This rooster treading can eventually result in the loss of feathers from the hen’s back and shoulders.

Causes of Feather Loss and Wounds

Once feathers are worn off, the other hens start pecking, preventing the missing feathers from growing back. Further, a hen with missing feathers has little protection from the cock’s sharp claws during future matings. As a result, her back may become scratched by the claws and seriously wounded by the rooster’s spurs.

Bleeding wounds resulting from treading lead to more pecking by the other chickens. Deep wounds can become infected, resulting in gangrene and possibly death of the hen.

Hens that are lowest in the pecking order submit more readily to mating and therefore are more likely than higher ranking hens to suffer feather loss and wounds. An improper mating ratio — too many roosters in a flock, or not enough hens for a single rooster — also result in damage from treading.

Low blood calcium (hypocalcemia) causes muscle weakness that leaves a hen less nimble at getting away from amorous roosters, again leading to treading damage. Hypocalcemia mostly affects pullets just starting to lay, but can occur in a hen of any age, particularly during hot weather.

To prevent hypocalcemia, make sure layers have free choice access to a large-particle calcium supplement, such as oyster shell or limestone granules. In contrast to powdery supplements, the large particle size acts as a time-release calcium tablet, extending the period of calcium absorption and ensuring replacement of the calcium depleted during eggshell development.

Most roosters need their toenails trimmed periodically, to prevent injury to hens during breeding. Trimming the rooster’s spurs may also be necessary to prevent wounds due to treading.

If you have multiple roosters, you can minimize treading damage by housing them in separate coops and letting each run with the hens for only a few hours a week. Each cock will have a different set of favorite hens, offering the others some relief. If you have only one rooster, you might divide your hens into two flocks and alternate the rooster between the two groups.

As soon as you notice a hen is starting to miss feathers because of treading — or even before feathers go missing — outfitting the hen with a well-fitting mating saddle will protect her back from damage. It will also protect the bare area from being pecked, allowing the feathers to grow back more quickly.

In the fall, after the flock has molted and the hens are all fully feathered, mating saddles should be removed. They may be washed and stored, ready to prevent rooster treading damage during the next spring mating season.