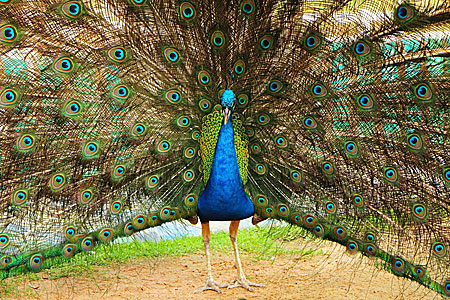 Peafowl (Pavo cristatus) are large, attractive birds that originated in India and Sri-Lanka. They are about the same size as turkeys (Meleagridis gallopavo), to which they are closely related.

The term peafowl denotes the species. The male is a peacock, the female is a peahen. The babies are peachicks.

Like everything in life, raising peafowl has both pros and cons. Let’s start with some of the downsides:

Mature peacocks, starting at about age two, make a loud shrill call that can be heard for miles. And they aren’t reluctant to call in the middle of the night. Unwitting neighbors may interpret the call as a cry for help. Neighbors may complain, or even call 911 to report a crime in progress. Peacocks also occasionally honk, like a goose. Peahens are not nearly as noisy, although they do make a variety of pleasant, chatty sounds.

Peafowl are omnivorous. As well as eating a variety of insects and small animals, they also eat a variety of vegetation that can include flowers and bulbs, tender garden vegetables, and landscape plants. Where dogs or cats are fed outdoors, peafowl will empty their dinner bowls in short order. To prevent such problems, peafowl must be confined to a covered pen.

Having originated in a warm climate, peafowl prefer warm weather to cold weather. They also don’t do well in windy or wet weather. They therefore need a shelter that will adequately protect them from bad weather.

Mature peafowl need plenty of space in which to exercise and avoid unhealthful overcrowding. And a cock needs enough open space to fan out his tail without breaking feathers. Confined peafowl need a much larger pen than most other poultry species.

Peafowl like to roost in trees, and also like to parade around on rooftops. If the building they favor belongs to neighbors, they may not be too happy about having large, sharp-clawed birds trampling around on their roof. Clipping the wings of peafowl is not a good idea, because that leaves them susceptible to predation.

Although peafowl can fly, when allowed to free-range they are easy prey to a host of predators. They are especially attractive to the bigger predators that prefer larger prey. A hen on the nest is especially vulnerable. A cock, when grabbed from behind by a predator, will get away by releasing his tail feathers, which destroys much of the beauty of having peafowl in the first place. The solution is to confine them to a predator resistant covered pen.

Peafowl are awesomely beautiful, especially the cocks. Starting at about age three, a mature peacock grows a train of long, colorful feathers he lifts up and fans out while courting females, much as a turkey tom fans and displays his tail feathers. The somewhat smaller and less colorful peahen lacks a feather train, but hey — it takes two to tango!

At the end of the mating season, peafowl molt and the cock temporarily loses his fine feather train. These gorgeous feathers may be gathered up and sold, given as gifts, or used in a variety of crafts including jewelry, hair adornment, clothing accessories, or fly-tying — or simply placed in a large vase for display inside the home. Many people believe displaying peacock feathers attracts positive energy.

When a peahen is about 2 years old, she’ll start laying white or off-white eggs that are about three times bigger than the average chicken egg. Beginning in March, she may lay as few as three or as many as a dozen or more eggs, and then decide to brood and hatch out a clutch of peachicks. Or she may continue laying up to around two-dozen eggs for the season. Peahen eggs taste much like chicken eggs.

As with other poultry, a flock of peafowl can easily end up with too many cocks and, like other poultry, their meat is quite delicious. It has been compared to chicken, but it is actually more like turkey or pheasant meat. Peafowl meat is extremely lean and relatively low in cholesterol. A mature cock can grow to 8 to 13 pounds live weight, while a hen will weigh 6 to 8 pounds.

Peafowl are great for pest control

Peafowl are amazing foragers. Allowed to roam, they will eat an enormous amount of ticks, termites, spiders, locusts, and other insect pests. They also eat snakes and mice, or at least discourage them from hanging around.

Make a commitment to raise peafowl and you will be rewarded with birds that can adorn your yard for 15 or 20 years. Or, if well cared for, maybe as much as 50 years!

1 thought on “6 Pros and 6 Cons of Raising Peafowl”