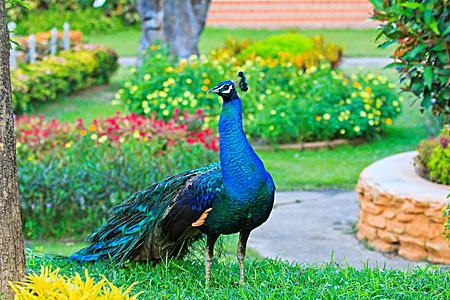 Once you have weighed the pros and cons of keeping peafowl, and have decided the pros outweigh the cons, you are ready to embark on your peafowl-raising venture. To help you get started, here are six tips for raising peafowl.

House peachicks in a brooder until they grow enough to stay warm on their own. Start the temperature at 95°F, reducing it by about 5°F each week for the first six weeks. In adjusting brooder temperature, take a cue from the chick’s body language.

For the first six weeks, peachicks should be fed a game bird starter or turkey poult starter. Medicated starter will help prevent an outbreak of coccidiosis, to which peachicks are susceptible. Also provide a continuous supply of clean water.

Peachicks may be moved out of the brooder when they are about six weeks old and daytime temperatures remain above 65°F and nights are not overly chilly. At this age they are too young to free range but may be kept in a coop with a run that offers protection from hot sun, wind, and rain and provides predator protection overnight.

During the first few nights, check on them to make sure they are okay. If the nighttime coop temperature dips toward freezing, or the weather turns stormy, gather them up and bring them back into the cozy brooder. After they are fully feathered, peachicks can remain in unheated, outdoor housing.

The more space mature peafowl have, the better off they are. Peacocks need enough space to be able to fan out their feathers without bumping into obstructions. Typical pen space per bird is 10 feet by 10 feet. The size for a pair of peafowl, then, would be 10 feet by 20 feet.

The pen must be fully enclosed, including at the top, to keep the peafowl from flying out and predators from getting in. A run-in shed at one end of the pen, preferably on the north side, will provide shade, protection from stormy weather, and a place to roost at night.

Peafowl also need enough height to roost up off the ground. The pen-and-shelter should be at least 7 feet high, with an under-cover roost at least 4 feet off the floor. The roost should be constructed from a 2-by-4 with the edges slightly rounded and the wide side facing upward.

Since a peahen will lay her eggs on the floor, all you need for nests is to provide lots of soft nesting material inside the shelter. It should be dry, absorbent, and insulating. Popular choices are pine shavings and straw.

Peafowl should be fed gamebird maintenance ration from the age of six weeks until the hens are ready to lay. During the breeding season they should be fed a gamebird layer ration. Where gamebird rations aren’t available, turkey rations are similar. Rations intended for chickens lack sufficient protein for peafowl of all ages. Oyster shell, offered free choice, will help hens produce eggs with strong shells.

Occasional treats are okay but should not consist of the entire diet. Favorite treats include mealworms, peanuts, and sunflower seeds. Fruits and vegetables, especially leafy greens such as cabbage and kale, are also big hits. In winter, the calories from a modest amount of mixed grains (chicken scratch) will help peafowl stay warm.

Constant access to clean, cool water is essential. Waterers and feeders should not be hung, as they are for chickens. Peafowl like to fly and getting tangled in the chain or rope used to hang a feeder or drinker could result in a broken wing.

In their native habitat, peafowl forage for greens, grains, and insects, as well as snakes, frogs, and other small animals. They will do the same at your place, provided you have enough space available for them to roam where they won’t annoy neighbors with their noisy calls, fly into someone’s garden for a damaging snack, or prance around on neighboring rooftops.

By the time they reach one year of age, peafowl are savvy enough to free range. If they were not raised in the pen, before being let out to free range they should spend several months confined to the pen while they get oriented to the lay of the land.

When you open the pen, let them explore on their own. Do not herd them out of the pen and don’t let playful dogs chase them. You want them to feel comfortable going out and back in at will.

Initially they likely won’t go far from their pen. After a few hours, encourage them to return to the pen, which shouldn’t be difficult since they are used to eating inside the pen. Providing a little treat will encourage them to return to the pen for the night. Enclose them inside the pen each night to protect them from predators, shelter them in bad weather, and keep them from going completely wild.

Above all, don’t clip the wings of free-ranging peafowl. Flying is their best defense against predators.

The two main health issues with peafowl are coccidiosis when they are young, and worms when they free range. Medicated starter should take care of coccidiosis. Deworming every three months will keep the worms at bay. The most common dewormer is Piperazine, although Ivermectin or Fenbendazole are also used to deworm peafowl.

According to veterinarian L. Dwight Schwartz’s comprehensive article on diseases of peafowl: The diseases of peafowl are almost identical to those of the turkey. Likewise, peafowl will respond to medications that are known to be effective for turkeys. Anyone experiencing illness in peafowl can consider it a turkey in seeking a diagnosis and establishing veterinary treatment.

When to Start Peachicks

Peafowl originated in a warm climate, and they like to be warm. That makes spring and summer the best times to start raising peachicks, so they will be fully feathered before the onset of cool weather. Cackle Hatchery® offers peachicks from June through August.

When you order peachicks, consider including a few chicks of a large chicken breed. The chickens will help the peachicks get through the stress of shipping and will also help them get off to a good start by more quickly learn to eat and drink once they arrive.

Gail Damerow, who has kept both penned and free-range peafowl, offers numerous tips on dealing with poultry predators in her book, What’s Killing My Chickens?