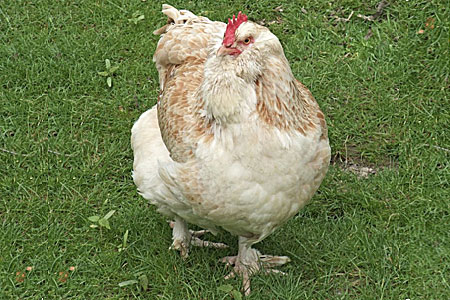 Most chickens have four toes on each foot. Of the chicken breeds found in the United States, five breeds typically have five toes on each foot. The condition is technically known as polydactylism — from the Greek words poly meaning many, and daktylos meaning a finger or toe. The trait of having five toes represents a mutation that has occurred periodically throughout history. Our five chicken breeds that have five toes are Dorking, Faverolle, Houdan, Silkie, and Sultan.

The Dorking was developed in the area around Dorking, England, from chickens originally introduced by Roman legions in the first century. It is a docile chicken with short legs and can be either large size or bantam.

Dorkings come in two comb varieties — large single comb (suitable for warm climates) and rose comb (more suitable for northern areas). They also come in a few color varieties, of which silver gray is the most common. The hens lay eggs with slightly tinted shells and brood easily.

The Faverolle was developed in France as a dual-purpose farmstead chicken and named after the French village of Faverolle. It was bred from so many other breeds that no one can agree on its exact heritage.

Favorolles have a single comb, a beard and muffs, and slight leg feathering. They may be large or bantam and come in a few color varieties, of which the original color, salmon, remains the most common. The hens are good layers of eggs with light-brown shells and tend toward broodiness.

The Houdan is an old French breed, named after the town of Houdan, which traditionally has been a source of poultry for the Paris market. This chicken is a dual-purpose breed that is also ornamental. Its crest, V-comb, and beard likely were bestowed by Crevecoeur and Polish ancestors, while its five toes were contributed by the Dorking.

The Houdan may be either large or bantam in one of two color varieties — mottled is the original; white was developed in the United States. The hens lay white-shell eggs and tend toward broodiness but are not particularly adept at it.

The Silkie is an ancient breed most likely originating in China. The breed name comes from its soft, furlike plumage, resulting from the inability of the feather barbs to lock. All that fluff makes these birds look bigger than they really are. Silkies can mature to a weight of 4 pounds or more, but in North America they are bred to be small and therefore are not true bantams.

A Silkie has a crest, walnut comb, turquoise earlobes, and feathered legs. The skin and shanks are black, and the face, comb, and wattles are nearly so. Silkies may be either bearded or non-bearded and come in a few color varieties, of which white and black are the two most common.

These are friendly, docile chickens that can’t fly, and their fluffy plumage offers little protection from rain and temperature extremes. The hens are decent layers of tinted eggs and are such excellent setters they are often kept solely for the incubation of the eggs of rare or non-brooding fowl.

The Sultan is an old ornamental breed originating in Turkey. In its native country it’s called Serai Tavuk, meaning Sultan’s palace fowl, because for decades it was kept exclusively in palace gardens.

This breed is smallish with a large crest, a V-comb, a beard and muffs, drooping wings, feathered legs, and vulture hocks. It may be large or bantam and originally had solid white plumage. Other colors have been derived by crossing Sultans with Polish.

Sultans are docile and friendly, capable fliers, and less inclined to scratch than other breeds. The hens are poor layers of white-shell eggs and seldom brood.

Genetic traits are controlled by pairs of genes, one from each parent. When the two genes in a pair are not the same, they are called alleles. An allele is simply a variation of a gene. The word is short for allelomorph, literally meaning “other form.”

Since the allele for five toes has greater influence than the allele for four toes, when both alleles are present the five-toed trait dominates. A polydactyl mixed-breed chicken has at least one parent with five toes.