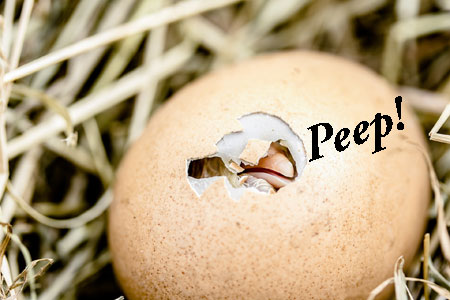 Chicks, ducklings, and babies of other barnyard birds are precocial, meaning they are able to feed themselves almost from the moment of hatch. Precociality is the reason why chicks peep before hatching.

A mother hen with chicks that don’t all hatch together finds herself in quite a predicament: Should she leave the nest to protect the early hatchers, or stay on the nest until the rest hatch? In such a situation, some broody hens abandon the nest in favor of going with the active early hatchers. Others steadfastly remain on the nest, to the detriment of the early chicks wandering around without a protector. This avian quandary is one reason poultry keepers with broody hens are encouraged to provide each setting hen with private quarters — so other hens can’t contribute eggs to her nest after she starts setting.

Hours before hatching, a chick uses its egg tooth to break through the shell membrane into the air space at the blunt end of the egg. Shortly thereafter it will start peeping. When a chick begins to breath the oxygen in the air cell, peeping helps strengthen its respiratory system

By peeping, about-to-hatch chicks also communicate with each other and with their setting-hen mama. Chicks in the shell peep, the broody hen clucks. The early birds, and the mama hen, thereby encourage the slower chicks to hurry up, so all will hatch within a few hours of one another.

But that’s not the only reason why chicks peep before hatching. Another function of all that peeping and clucking is so the chicks and their mother hen will recognize each other’s call after the hatch. If you’ve ever seen baby chicks hatched by two different hens mingle together, you’ve likely noticed that when both mothers cluck, the chicks in each brood scramble to rejoin their own mom.

But chickens, ducks, guinea fowl, turkeys, and other barnyard species each make their own distinct sounds. And each species quite commonly, and successfully, hatches eggs laid by some other species. So how is it that guinea keets or turkey poults hatched by a chicken hen so readily recognize the hen as mom?

Spry precocial birds fresh out of the nest can easily get separated from their mom. They don’t have much time to learn to recognize the sound of her call, and responding to her call is essential to their survival.

So, chicks learn to recognize the sounds their mother makes while they’re still in the shell, even if she doesn’t speak their native language. By entering the world with the ability to quickly find their way back to mom, freshly hatched precocial peepers enter the world ready to hit the ground running.