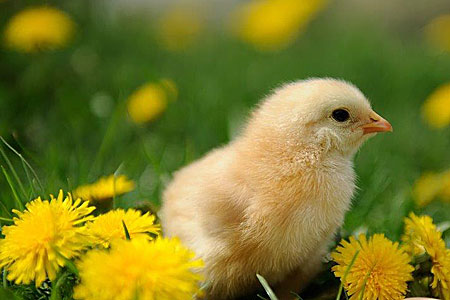 Until the 1960s, no one was able to determine the function of a chicken’s cloacal bursa. That year, in an attempt to find out, Ohio State University graduate student Bruce Glick performed bursectomies on some chickens. But it didn’t seem to make any perceivable difference.

Then a fellow graduate student, Timothy Chang, borrowed some of Glick’s chickens to inject with salmonella vaccine. Chang intended to demonstrate to his undergraduate class how a vaccine triggers the development of defensive proteins called antibodies.

But 80% of Glick’s chickens failed to develop immunity-conferring antibodies. As it turns out, each of those chickens had had its cloacal bursa removed. Only the chickens with an intact bursa developed antibodies.

Finally, scientists had a clue about the function of a bird’s cloacal bursa.

Glick and Chang published their findings in a 1956 issue of Poultry Science. This research led to the discovery of two kinds of infection-fighting lymphocytes: B (bursal) cells and T (thymus) cells.

B Cells and T Cells

Lymphocytes are specialized white blood cells, popularly known, as killer cells, that neutralize or destroy invading microbes. B cell lymphocytes are produced in the cloacal bursa (and elsewhere in the body). T cells are somewhat smaller lymphocytes produced in the thymus. Each type of cell has a specific role in a chicken’s immune response. And, as it turns out, in the immunity of humans and other animals.

B cells produce antibodies that defend body fluids. T cells work on the cellular level. Both start out as stem cells developed during incubation in the embryo’s yolk sac, liver, and bone marrow. The circulatory system delivers these cells to the chick’s cloacal bursa and thymus, where they become specialized as they mature.

This relationship between B cells and T cells was discovered in the 1960s, when medical researchers at the University of Minnesota were attempting to prove that lymphocytes originate in the thymus. When Glick and Chang’s paper came to their attention, they surmised that maybe immunity depends on more than one organ.

Once again, chickens took the spotlight. To test the new theory, Max Cooper removed the thymus from some chicks and the cloacal bursa from others. Then, using radiation, he destroyed any existing immune cells in all the chicks.

His experiment showed that the cloacal bursa and the thymus produce two different kinds of leukocytes (B cells and T cells), that work together to fight infection. Of course, humans and other non-avian species don’t have a cloacal bursa. But we do have other organs, such as bone marrow, that provide the same function.

Glick’s discovery thus started a whole new chapter in our understanding of biology in general and immunology in particular. His work led, for example, to the development of new types of vaccines and to treatments for autoimmune disorders like leukemia and other cancers. And all with the help of chickens.

Although some of Glick’s colleagues deemed his discovery worthy of a Nobel Prize, he didn’t gain public recognition until he received a Golden Goose Award in 2018. The Golden Goose Award highlights obscure federally funded research that has led to major scientific breakthroughs — like investigating an obscure organ in chickens that led to a major breakthrough in understanding how our immune system works.