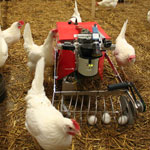 Like the Roomba robot eternally vacuuming a living room floor, the egg collecting Poultrybot searches for and gathers eggs laid by hens on the chicken coop floor. So-called floor eggs are the bane of every chicken keeper.

When Europe banned caged layers, egg producers who turned their hens loose in the coop found that some of the hens prefer not to use the provided nests, but persist in laying eggs on the floor. Seeking to reduce the workload of egg farmers, a group of students working with the Farm Technology Group at Wageningen University in the Netherlands invented a robot that rolls around the coop seeking out and collecting floor eggs.

In addition to saving humans the manual labor of finding and collecting eggs on the floor, Poultrybot acts as an extra set of eyes and ears with a continuous presence among the hens, says Wageningen University graduate student Bastiaan Vroegindeweij. Like any good multi-tasking housekeeper, the robot keeps track of the coop’s temperature and humidity, as well as watching for ailing hens.

Dutch research chickens didn’t take long to get used to having a robot among them. Initially they were frightened by the odd creature, but soon they grew curious about it, even becoming so bold as to peck the Poultrybot. Eventually they just ignored it.

The egg collecting robot isn’t perfect. It has trouble finding eggs laid in corners and in groups, or eggs that get buried in the coop litter. And just like us humans, sometimes it drops an egg.

Although this Poultrybot is designed specifically for detecting and collecting eggs, Vroegindeweij says it also might be used to clean out the coop. Now that’s something we would all find handy!

We thank Hans Bijleveld of Reed Business for providing a photo of Poultrybot. Bastiaan Vroegindeweij has posted this video of the robot in action on YouTube.

And that’s today’s news from the Cackle coop.