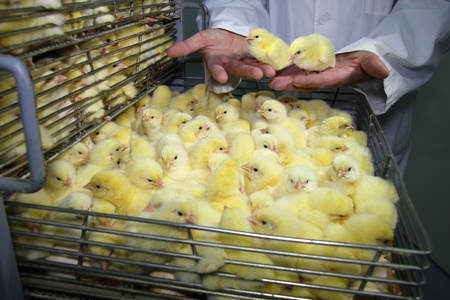 We know that eggs must be properly incubated in a warm environment for them to form healthy, well-developed chicks. But what if the amount of light that eggs are exposed to during incubation could have an effect on the temperament of chickens as well? According to a paper recently published in Applied Animal Behavior Science, prolonged light exposure during incubation could make freshly-hatched chickens calmer and less prone to stress behaviors.

To test the behavioral effects of embryonic light exposure, scientists at the University of California, Davis shone light on more than 1,000 eggs at different intervals during three weeks of incubation. Some groups of eggs were incubated in complete darkness, others were exposed to light for one or two hours per day, and some were exposed to light for a full 12 hours per day.

Once the chicks had hatched and reached 3 to 6 weeks of age, the scientists selected 120 chicks at random and tested the birds’ fear responses to a human “predator.” After analyzing the results of their experiment, the scientists found that the chicks who received a full 12 hours of light per day made an average of 179 distress calls over a period of three minutes. Chicks that were incubated in complete darkness, on the other hand, made an average of 211 distress calls in three minutes.

The birds that received a lot of light during incubation “would sit in the closest part of the box to me and just chill out,” said animal scientists Gregory Archer in an interview. The chicks incubated in complete darkness were more likely to run away from Archer and the other researchers.

The scientists aren’t sure why light exposure seems to affect the temperament of birds, but they hope that it might have a positive impact on commercial breeding operations in the future. When chickens are stressed and afraid, they’re more likely to injure themselves at processing plants. By breeding calmer chickens, poultry producers could mitigate harmful behaviors like feather pecking and reduce injury rates.