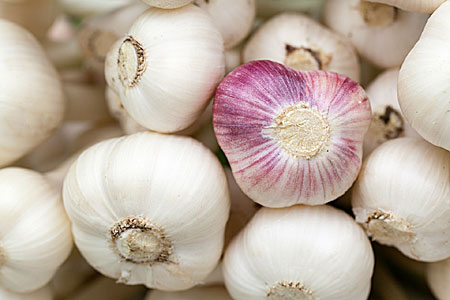 Garlic (Allium sativum) has so many beneficial properties that researchers haven’t yet discovered them all. What is well known is that garlic has broad-spectrum antimicrobial properties, making it effective against many bacteria, fungi, viruses, and internal parasites, including protozoa. That’s why so many people are enthusiastic about using garlic for chickens.

Garlic’s principal active ingredient is allicin, which is responsible for garlic’s distinct flavor and pungent odor. Fresh garlic contains the allicin precursor alliin, which has no odor.

Crushing or chopping garlic releases the enzyme alliinase, which acts on alliin to form allicin and other sulfur-containing organic compounds. Interestingly, sulfa drugs and penicillin are also organic sulfur compounds, but derived from sources other than garlic.

Allicin degrades rapidly, but meanwhile it reacts with garlic’s other components to form additional organic sulfur compounds with varying antimicrobial properties. One major compound is ajoene, which has antiviral, antifungal, and antiparasitic properties.

Allicin and ajoene affect the viability of some two-dozen different pathogenic organisms by blocking enzymes these pathogens need for metabolism. At low concentrations, too few enzymes are blocked to outright destroy pathogens. But they can reduce the pathogens’ virulence.

At higher concentrations they can block enough enzymes to kill pathogens. And — unlike sulfa drugs and penicillin — allicin and ajoene do not promote resistance.

However — also unlike sulfa drugs and penicillin — garlic does not function as a systemic antibiotic. Rather, it kills on contact. It therefore should be considered to be more of an antiseptic than an antibiotic. Still, never apply raw garlic directly to the skin (for example, to prevent infection of a wound); it can result in serious blistering.

On a basic level garlic boosts immunity by stimulating the growth of beneficial bacteria in the large intestine. For mature chickens, crush 4 garlic cloves into one gallon of drinking water. Change the water daily. If the chickens are unfamiliar with garlic, reduce the initial amount until they will drink the water, then gradually increase the amount up to four cloves per gallon.

Small amounts of garlic fed to baby chicks twice a week will help their immune systems develop. It also gets them used to the flavor, so they will be more likely to accept it later in life.

As an alternative to crushing garlic cloves in the drinking water, garlic powder may be added to the layer ration. Used at the rate of 1-1/2 pounds per 50 pounds of ration, garlic powder neutralizes the odor of manure, but does not affect the flavor of eggs. Taste testers, in fact, preferred the taste of eggs from hens fed garlic, perhaps because it reduces an egg’s sulfur content.

Garlic juice spray may be used to control northern fowl mites. To make garlic juice spray, peel cloves from one head of garlic and crush them in a garlic press or whirl them in a food processor. Drain out the juice by pressing the pulp into a mesh strainer over a bowl. To remove bits of pulp that might clog your sprayer, strain the juice again, this time through a paper coffee filter.

To control northern fowl mites, apply the spray to the affected chicken’s vent once a week for 3 weeks. Continue thereafter as needed to maintain control. Aging the spray a couple of days before using it will prevent irritation to the skin around a chicken’s vent.

Theoretically, garlic can kill pathogens in the digestive tract, if it comes into direct contact with them. But so far no one has proven that garlic works against any specific disease.

Although garlic largely targets pathogenic bacteria, to a lesser extent it also affects beneficial intestinal bacteria. Therefore, using more than recommended amounts can be detrimental to a bird’s health.

A much-discussed issue among poultry keepers is that among garlic’s organic sulfur compounds are toxic thiosulfates. These compounds potentially can cause hemolytic anemia, a serious disorder that destroys red blood cells. However, birds are somewhat protected by the fact that their red blood cells have a nucleus — unlike the red blood cells of cats and dogs, both of which are much more sensitive to the toxic effect of thiosulfates.

Also, the thiosulphate level in garlic is so minimal as to be barely traceable. When chickens eat small amounts of garlic over a long period of time, their red blood cells regenerate nearly as fast as they are destroyed. Bottom line: a chicken would have to eat an awful lot of garlic all at once to have a toxic reaction.