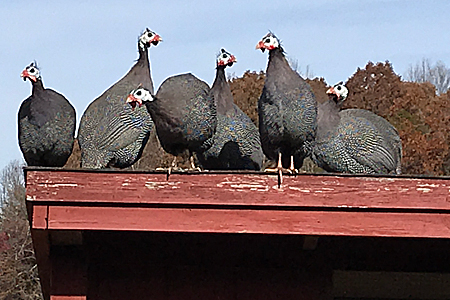 Guinea fowl are notoriously independent, often preferring to roost outdoors at night. They are more likely to perch high on a tree limb or on top of the coop roof, than to sleep inside, where they would be safe from owls and other night prowling predators. Getting guineas to go inside at night is the bane of many a guinea keeper.

One of the easiest ways to train guineas to sleep inside the coop is to raise baby guineas (keets) with chicken chicks. Training chickens to roost indoors is somewhat easier than training guineas. In turn, the chickens will train the guineas.

Guineas often want to linger outside after all the chickens have wandered indoors for the night. Having a light on inside the coop encourages the guineas to move toward the light as sunlight fades. If the coop has an automatically closing pop-hole door, set it to close a little later to ensure the door doesn’t close before the guineas decide it’s time to go in.

Guinea fowl are quick to detect any change that could possibly be interpreted as representing danger.  If their coop usually has a light on in early evening, and the light fails, the guineas know something is wrong and likely will not go in that night. If they share a coop with chickens, and the chickens are removed, guineas take that as a sign the coop is no longer safe and may refuse to enter. Take measures to avoid such potentially stressful situations.

The reason guineas tend to roost in trees is that they feel safest in high places. If they feel the perches inside the coop are not high enough, they will seek other roosting spots. The roost height for guinea fowl should be at least four feet above the coop floor. If the coop is fitted with graduated, ladder-like roosts, guineas always find their way to the top rungs.

Feed Them at Night

Guinea fowl, like other poultry, tend to chow down toward evening, to avoid going hungry overnight. A good way to train guineas to go inside is to feed them in the late afternoon, rather than in the morning. When they hear the feed bucket rattle, they’ll scurry inside for dinner. Or you might toss a handful of scratch grain into the coop near sundown and close the door when the guineas scramble indoors for the grain. After a few nights, they will learn to go in on their own.

As farfetched as this might sound, sometimes you can talk guineas into roosting indoors. That, of course, takes the patience of Job. But if you develop a good rapport with the birds while they’re keets, they will learn to take comfort in the sound of your voice. And they just may listen when you try to convince them that roosting indoors is the best plan for the sake of their own safety.

7 thoughts on “Getting Guinea Fowl to Roost Indoors at Night”