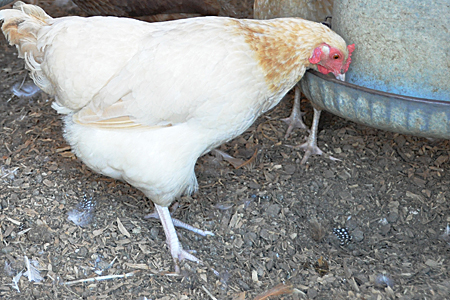 How much feed a chicken eats each week varies with the chicken’s age, breed, and strain, degree of activity, and condition of health. Other factors include the ration’s palatability and texture, and its energy and protein content.

In cold weather, a chicken stays warm by eating more than it does during the heat of summer. Free range chickens may seem to eat less if they are able to forage for part of their nutritional needs. Wasted feed, or a feeder offering access to rodents and birds, may give the appearance that chickens are eating more than their fair share.

So the answer to “How much feed does a chicken eat?” is essentially an estimated average.

To estimate how much feed a flock of mature chickens will eat in a week, multiply the following averages by the number of birds in the flock.

Estimates for other types of mature poultry:

The amount a chick eats keeps changing as the bird grows. Estimates for a growing bird are based on the growth period. Here’s how much you can expect to feed baby chicks:

When estimating how much feed you’ll need between trips to the farm store, get only as much as you will use within about 6 weeks of manufacture, since aging feed loses nutritional value. Store the feed in such a way that it won’t go rancid, moldy, or stale. Rations keep best when stored in a cool, dry place, away from direct sunlight. Once you open a bag of feed, transfer the contents to a sealed container that keeps out insects and rodents.