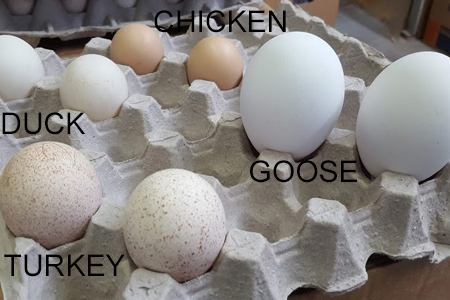 When we refer to eggs, we’re usually thinking of chicken eggs. But other types of poultry lay eggs that are just as tasty.

Every egg contains a yolk surrounded by albumen, encased in membranes, and protected by a thick shell. Differences occur in how these parts are put together. Let’s see how the eggs of chickens, turkeys, ducks, and geese compare.

The eggs within a given species vary slightly in weight from one bird to the next. For comparative purposes, an average large-size chicken egg weighs about 2 ounces. A duck egg weighs a little more at 2.6 ounces. Chicken and duck eggs are similar in shape.

Turkey and goose eggs are similar to each other in shape, and both are pointier than chicken or duck eggs. A turkey egg is about twice the size of a chicken egg but has an average weight of only about 3 ounces. A goose egg weighs an amazing 5 ounces, or nearly one-third of a pound!

An egg’s shell and associated membranes account for about 10% of the weight of a chicken, duck, or goose egg. Turkey eggs, on the other hand, have proportionally less shell at 9% of the egg’s total weight.

Generally, the bigger the egg, the greater its breaking strength. Chicken eggs are the smallest of the four species compared here, and they are the easiest to crack. They have a breaking strength of about 8 pounds.

Duck and turkey eggs have tougher shells. Both have a breaking strength of approximately 11 pounds. Goose eggs, as you might expect, are the most difficult to crack. It takes about 18 pounds of compression to break the shell of a goose egg.

The size of an egg’s yolk determines the egg’s richness. Chicken eggs have proportionally less yolk than eggs of the other three species. The yolk of a chicken egg accounts for about 44% of the edible portion (yolk plus albumen).

A turkey egg is a little richer. The edible portion consists of 49% yolk. The yolk is also a little thicker than that of a chicken egg, requiring more vigorous mixing if you’re scrambling turkey eggs or incorporating them into a batter.

A duck egg has a proportionally even larger yolk, making up 56% of the edible portion. When fried or boiled, a duck egg is firmer and a little chewier than a chicken egg.

Goose eggs literally take the cake, if you’re looking for extra richness in batter for baked goods. The yolk makes up a whopping 73% of a goose egg’s edible portion.

The flavor of all four types of eggs is about the same. So why aren’t we eating more eggs from these other poultry species? Well, with the exception of Khaki Campbells and Runner ducks, no other species lays as well as a chicken. But if you’re raising ducks, turkeys, or geese and have extra eggs on your hands, by all means take advantage of your good fortune and enjoy experimenting with the culinary aspects of those eggs.