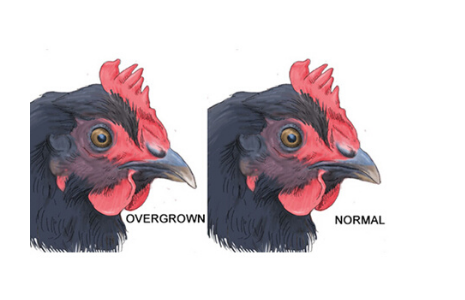 In a natural environment, a chicken’s beak wears down as fast as it grows. Periodically a chicken wipes its beak on the ground to clean it. The maneuver at the same time sharpens the beak for pecking and keeps it from growing too long.

The upper half of a chicken’s beak is naturally a little longer than the lower half. But when a chicken lacks opportunities to keep it worn down, the upper half can grow so long it interferes with eating and preening. When the top half of a beak grows too long, the condition is known as parrot beak.

As soon as the upper half of a beak begins to unduly overlap the lower half, you can simply shorten it with a fingernail file. Once it has passed the filing stage, you’ll need to use a pair of pet toenail clippers or human nail trimmers. Trim the beak the same as you would trim your fingernails.

The part that needs to be trimmed away will be lighter in color than the rest of the beak. If in doubt, look inside the chicken’s mouth and you easily will see where live tissue ends.

Trim a tiny bit at a time, making sure you don’t get into live tissue and cause pain and bleeding. In most cases only the upper half needs trimming. On rare occasions the lower half may need a little reshaping, especially if a too-long upper half had pushed the lower half in the opposite direction.

Keep an eye on the beak’s growth, and trim it as often as necessary for the bird’s comfort. A beak that needs reshaping will likely need to be trimmed periodically throughout the bird’s life.

For the record, beak trimming is not the same as debeaking — although the commercial poultry industry euphemistically calls debeaking “beak trimming” or “beak conditioning.” Debeaking involves cutting so much from the end of a chicken’s beak that it remains permanently impaired to prevent cannibalism. Chickens in a properly managed backyard flock should never suffer the indignity of being debeaked.