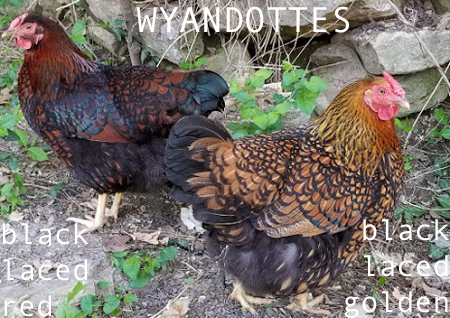 The golden laced Wyandotte was the second Wyandotte variety to be listed in the American Poultry Association Standard of Perfection. First came the silver laced variety, admitted in 1883.

To this day, this variety remains the most popular of the Wyandottes. Its ideal color pattern is that of the silver Sebright bantam, but with wider lacing, in keeping with the larger size of the breed and its corresponding larger feather size.

One of the early names for the Wyandotte breed was “American Sebright,” although it is in no way related to the Sebright. To avoid confusion, the breed name was changed to Wyandotte when the first variety was standardized.

“With the emerging colors of laced varieties over the last 15 years, we feel it’s less confusing to have better descriptive names,” says Jeff Smith of Cackle Hatchery®. “So we are using full descriptive names for the Wyandottes we sell.”

Cackle Hatchery is among only a handful of breeders developing this new variety. The hatchery has been working with their strain since 2012. Although the variety is not yet listed in the Standard of Perfection, several proponents are working to standardize and gain recognition for the attractive black laced red Wyandotte.

And that’s today’s news from the Cackle Coops.