Mean chickens occasionally appear in nearly any breed, more commonly among roosters than among hens. The first thing to do is try to figure out what triggers an attack. Sometimes it’s something as simple as he doesn’t like your new chore boots, your favorite floppy pants, or the way you swing the feed bucket. Making a simple change in how you do things often can stop the problem before it gets out of control.

Once you get over the shock of that first attack, start paying attention to the rooster’s body language, which will give you a pre-attack warning. Usually the rooster will sidle up to you and start skittering sideways as he gets closer. He’s thinking of attacking, but he also has one eye toward an escape route in case the attack goes wrong. As he launches the attack he’ll spread his wings and puff out his hackles to make himself look big and fierce.

During your initial assessment phase, protect yourself by wearing long pants and boots. Since most attack roosters will aim at your lower legs, they can easily draw blood on bare legs. If you have to protect yourself by holding up a foot, a boot will deflect the brunt of the attack.

Not all roosters mount a direct attack. Sometimes a rooster will lay low until he thinks you aren’t looking, then run up behind you and launch an attack on the back of your legs. In this case, if you are paying attention and notice he has begun to charge, and you turn around before he reaches you, he may abandon the plan. And if not, you will be in a better position to hold up your booted foot to prevent an attack on your legs.

An attack rooster needs assurance that you are not a threat. One way to reassure him is to appease him with judicious stroking. First you have to catch him, for which you’d be wise to wear long sleeve and gloves. Once you have the rooster cradled in one arm, and with good grip on both his legs, use the other hand to gently stroke his throat and wattles while you talk to him in a soothing and reassuring voice. Note the puzzled look on his face as he realizes how good that feels.

Continuing to hold him and talk to him, sit down or walk around until the rooster seems fully relaxed. When you’re ready to release him, set him down gently. If he walks calmly away, fine. If he turns and tries again to attack, catch him and start over. This procedure may need to be repeated for several days, or even weeks, until the rooster finally figures out you aren’t there for a fight.

Some chicken keepers feel the way to a rooster’s heart is through his stomach, believing he is unlikely to attack a person who brings scratch and other tasty treats. It’s true that a rooster can’t eat and attack at the same time. But if you throw the treat at him, he could take your arm motion and being pelted with grain as an act of aggression. Divert the rooster’s attention by throwing scratch near, but not directly at, him.

What Not to Do

To remove yourself as a tempting target, walk away, with haste if necessary. But don’t run, which invites an aggressive rooster to give chase. On the other hand, don’t turn the tables and chase the rooster. He may run and hide now, but invariably will come back later for a rematch.

Don’t try to stare him down. Face-to-face conflict is a typical attack stance between two roosters, and the last thing you want is for the mean rooster to believe you are a meaner rooster for him to conquer so he can move up in the pecking order. Besides, if he decides to launch an attack at your face you could be in a world of hurt.

If you can’t tame him with kindness, maybe he’s a hopeless case. Some roosters are just plain ornery. Others turn mean as they age. A rooster is nice to have as part of the home flock, but you don’t really need a rooster. If the rooster maintains attack mode no matter what you do, get rid of him before you or someone else gets seriously injured. 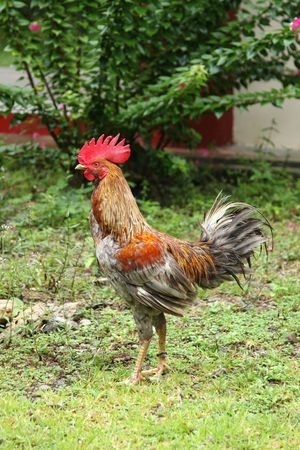 21 thoughts on “How to Deal with a Mean Rooster”