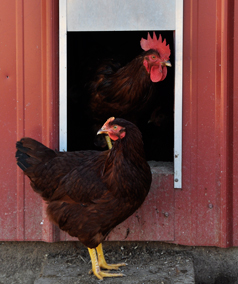 Chickens that spend nights within an enclosed coop will be protected from predators that prowl after dark. Chickens naturally want to “come home to roost,” although they may need to be taught where home is. Here’s how to train your chickens to go into their coop at night.

Furnish a cozy coop that provides protection from wind and rain, includes comfortable perches for the chickens to roost on, and can be closed up to prevent nighttime prowlers from entering while the chickens sleep.

Make sure the coop is large enough for the number of chickens in your flock and has sufficient access to feed and water stations to avoid pecking order squabbles. Also ensure there’s enough daytime light inside the coop for the chickens to find their way around. If windows don’t provide enough light, turn a light on during the day.

When you move your flock into the coop, confine them inside the coop for the first three or four days.

During warm weather, make sure the temperature inside the coop does not exceed 75ºF. If necessary, provide additional ventilation or install a fan. Windows may be left open, if the openings are screened with hardware cloth to keep the chickens in and predators out.

During the period of initial confinement, the chickens will learn to view the coop as their home. When you are ready to let them out, open the door and let the chickens decide to go out on their own. At first, they may be reluctant to go outdoors. Or the bolder flock members may wander outside while the more timid ones stay behind. Eventually the timid ones will follow the lead of the bolder chickens. Let them do their thing.

At nightfall, the chickens should start wandering back into the coop to grab a snack and hop up on the roost. If the coop tends to be somewhat dark at dusk, leaving a light on inside will encourage the chickens to gravitate toward the brighter coop as the sky darkens.

The first few evenings, check for stragglers outside the coop before closing up for the night. Chickens that bed down outdoors, or roost in trees, must be retrieved and placed inside. If the majority of the flock remains outside, gather them up and repeat the confinement for another couple of days before letting them out again. Some flocks are quicker to catch on, while others require a little extra patience, but eventually your chickens will learn to go into their coop on their own at nightfall.