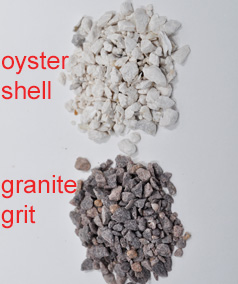 Natural grit consists of a collection of coarse sand, pebbles, and similar small, hard objects chickens eat while pecking on the ground. The grit lodges in the bird’s gizzard, where muscular action grinds the grit together with feedstuffs to break them down for digestion. Over time each piece of grit gets ground up, along with the feed, so the gizzard’s grit supply needs to be frequently replaced.

Whether or not chickens require supplemental grit is a matter of some debate. Chickens that eat only commercially processed feeds — such as chick crumbles or layer pellets — don’t need supplemental grit because saliva alone is sufficient to soften these feeds. Chickens that are fed whole grains can learn to manage without grit, provided the grains are introduced gradually to give the chickens’ gizzard muscles time to become strong enough to grind grains without the help of grit.

On the other hand, chickens that have an opportunity to forage naturally pick up grit from the environment to help digest fibrous plant material, making grit a normal part of chicken digestion. To ensure a flock has access to adequate amounts of grit, the wise chicken keeper offers it as a free-choice option. A solid bottom rabbit feeder makes an ideal grit hopper.

Mineral grit serves as a time-release source of minerals, most notably calcium carbonate (which laying hens need to produce strong eggshells), and therefore is commonly called calcium grit. Oyster shell is a mineral grit that erodes less readily than other sources of calcium carbonate, letting it serve double duty as a source of both calcium for strong shells and grit for digestion.

Commercially formulated rations that claim to include adequate calcium may in fact not provide enough for top laying hens to both maintain strong bones and strong eggshells, so they require a supplemental source. Feeding cleaned and dried eggshells back to laying hens furnishes some additional calcium, but not as much as a hen needs to produce eggs with strong shells.

Calcium grit is available in a variety of screened sizes, one of which is called chick grit or starter grit. But supplemental calcium should never be fed to birds that are not nearing the age of lay, as excess calcium can interfere with bone development and also cause kidney damage. Similarly, any chicken that does not need extra calcium (such as a rooster or an old and poorly laying hen) can overdose if it eats mineral grit, when what it really needs is inert grit.

Inert grit is a hard form of grit — such as granite grit or washed river sand — that is not as readily ground up by the gizzard as mineral grit. For growing or elderly chickens, and for roosters, the grit offered should be inert, to avoid calcium overdose. Baby chicks should not be fed inert grit until they are eating well, since they peck at everything and may fill up on grit to the exclusion of chick starter. When chicks start eating foods other than starter ration, they may be offered access to sand-size chick grit to aid digestion. Laying hens that have access to both inert grit and mineral grit will choose one or the other, based on how much additional calcium their bodies need.

1 thought on “What is Grit and Why Do Chickens Need It?”