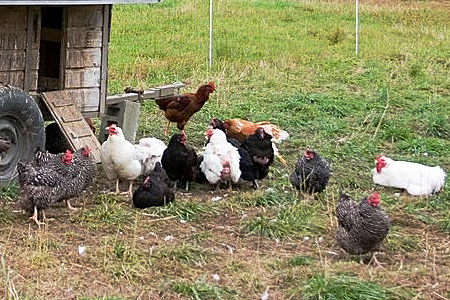 Chickens that stop roosting in their coop after having been trained to go into the coop at night likely have a good reason for not wanting to return. Your job then becomes determining what the reason is and taking corrective measures. Here are the seven most common reasons chickens become reluctant to go home to roost.

A predator that enters the coop during the night while the chickens are sleeping can scare them enough to want to stay outside in the future. Check for any entry points a predator could use to gain access to the coop, including tunnels, windows and ventilation openings that aren’t secured with hardware cloth, and a pophole door left open overnight. If you can’t always be on hand to close and secure the pophole after the chickens go in for the night, consider getting an automatic chicken door.

Rats rummaging around on the coop floor, and especially nibbling on the toes of sleeping chickens, will disturb the chickens’ sleep, discouraging them from roosting inside. Rats are attracted by feed in troughs or spilled on the ground, the ready availability of water, and protection from the elements. The best way to discourage rats is to make the area unattractive to them. Trim back weeds, grass, and shrubs and clear away any clutter that could conceal tunnel entrances. Fill feeders in the morning with only as much as your flock will consume before nightfall. Since rats require a daily intake of water, removing the drinking water during the night may be all that’s needed to discourage rats from hanging around.

Mites are the most common external parasite of chickens. Red mites — also called chicken mites or roost mites — live and lay their eggs in cracks near roosts or nests and make chickens restless at night by crawling onto them to feed while they sleep. Since red mites leave the chickens during the day, they may be controlled solely by cleaning up the coop — no need to treat individual birds. Clean facilities thoroughly (especially replace the litter) and apply permethrin or other pesticide approved for poultry, paying particular attention to cracks and crevices. Repeat the treatment in five to seven days.

A poorly ventilated coop, or one that is overcrowded and accumulates manure too rapidly, results in a high level of ammonia in the air. The pungent-smelling gas — released by bacteria that decompose manure — not only smells bad but is a health hazard for chickens. High levels of ammonia in the coop’s air can discourage chickens from sleeping inside. The solution is to improve ventilation, increase the coop size, or decrease the flock size, and replace the litter more often. A natural clay product such as zeolite that binds ammonia can help control odor between cleanings.

Chickens that live in a portable coop can get confused about finding their home if the coop has been moved during the day while the flock was out foraging. Some or all of the chickens may return to the previous coop location, even when the moved coop remains within sight. Solutions include moving the coop at night, after the chickens have gone inside to roost; moving the coop only a short distance at a time; and rounding up stragglers in the evenings until they all learn to find the coop in its new location.

If just one chicken doesn’t want to go into the coop at night, it could be getting bullied by those higher up in the pecking order. Maybe there aren’t enough roosts for the number of chickens, or the coop is simply too crowded. Adding more roosts, increasing the coop size, or decreasing the flock size are possible solutions. Occasionally one hen, or rooster, is the troublemaker, and rehoming the bully will solve the problem.

A second reason one chicken might stay out alone is if it has accumulated a nest of eggs in the yard and has decided to go broody. In this case you might try to move her, along with her eggs, to a safer place — doing so at night when she’s less likely to abscond from the new location. Or you could isolate her in confinement until she gives up being broody, then return her to the coop.

Depending on how long the chickens have been reluctant to return home to roost, once you take corrective measures, you may have to retrain your chickens to go into their coop at night.