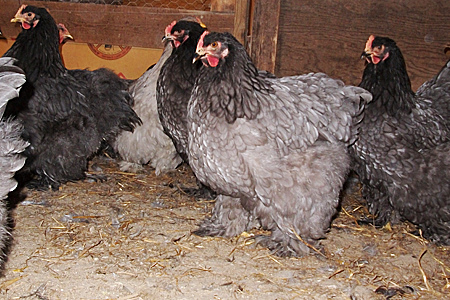 Ammonia is a pungent-smelling gas constantly released by bacteria that decompose chicken droppings. Not only does ammonia smell bad, it’s also a health hazard for you and your chickens. High levels of ammonia in the coop’s air can discourage chickens from eating—affecting the growth rate of young birds and the production of laying hens—and can cause conjunctivitis and respiratory damage. Ammonia is so harmful to humans that it’s considered by the United States Department of Labor’s Occupational Safety and Health Administration (OSHA) to be a hazardous chemical, defined as a chemical that poses a health hazard.

Inspecting the coop for ammonia

Imagine how much more hazardous ammonia is to chickens, especially since the heavy gas concentrates more near the floor than in the air. But before the level becomes high enough to cause serious health problems for chickens, you can easily detect the odor. To check the ammonia level in your coop, squat or bend down until your head is one foot above the litter, or about the height of a chicken’s head. Breathe normally for a moment or two. If your eyes, nose, or throat burn, the ammonia level is too high for your birds.

An important step toward controlling ammonia is to provide good ventilation to remove ammonia-filled air from the coop and bring in fresh air. Where windows aren’t sufficient, a slow-moving ceiling fan, or a fan installed high on a wall, would beneficially circulate fresh air.

During cold weather, chicken keepers tend to think about human comfort and want to keep their flock indoors where it’s cozy. But that’s not the healthiest situation for the chickens. Kept indoors, they deposit more droppings inside the coop, their collective body warmth encourages the proliferation of ammonia-producing bacteria, and their activity stirs up the litter and releases more ammonia into the air. Regardless of the weather, chickens should be allowed (but not forced) to spend as much time as they like outdoors.

Other important steps toward preventing high ammonia levels in your chicken coop are to regularly clean droppings that build up beneath perches, and to replace any litter that becomes wet around doorways or drinkers. Using an absorbent litter also helps control ammonia levels. Wood shavings are a good choice. Shredded paper is even better but must be removed and replaced more often. At the other end of the scale, straw has low absorbency and therefore is less desirable as litter.

Consider products that help control ammonia without harming your chickens

Some products are available to control ammonia in the coop. Lime is one such product, and one that causes much confusion. For starters, the word “lime” may refer to garden lime (calcium carbonate), quicklime (calcium oxide), or hydrated lime (calcium hydroxide).

Garden lime, also known as barn lime or ag lime, is a harmless product made by crushing limestone, and is sometimes applied to coop litter to temporarily mask the odor of ammonia. Quicklime is used in poultry houses as a disinfectant and is added to litter to increase the pH enough to destroy pathogens in the litter (such as those that cause avian chlamydiosis, avian influenza, and Newcastle disease), but quicklime is caustic and can burn the birds’ foot pads. Hydrated lime is worse, and far too caustic to be used in poultry litter.

All forms of lime are alkaline, and the bacteria that produce ammonia thrive in an alkaline environment. By increasing the pH level of litter, lime accelerates the release of ammonia, making the situation worse. Better options for neutralizing ammonia, as well as absorbing litter moisture and reducing the activity of ammonia-producing bacteria, are diatomaceous earth (DE), absorbent clay, and zeolite.

Diatomaceous earth is a mineral powder composed of the fossilized shells of diatoms, a type of algae. DE consists primarily of silica, which makes up some 90% of the earth’s crust. Naturally mined DE (as opposed to processed, or calcined, “pool grade” DE) is highly absorbent. Some DE brands include bentonite.

Bentonite is an absorbent clay that binds both ammonia and urates (the chicken version of urine). Bentonite gets its name from Fort Benton, Wyoming, where it was originally discovered. The clay is also called montmorillonite, named after similar deposits in the Montmorillon area of France. Bentonite binds irreversibly, reducing the compost value of manure-laden litter. While bentonite absorbs more moisture, meaning litter needs to be replaced less often, zeolite is better at controlling ammonia odor.

Zeolite in its natural form (as opposed to industrially produced synthetic zeolite) is a mineral created when volcanic lava mixes with fresh water or saltwater. Added to litter, it chemically binds and neutralizes ammonia molecules. Natural zeolite is harmless to chickens and the environment. Unlike bentonite, zeolite is fully compostable and acts as a slow-release nitrogen fertilizer.

Controlling coop ammonia involves good ventilation and proper litter management. If a coop has an ammonia problem that is promptly corrected, any chicken’s cells that were damaged by the ammonia fumes should repair themselves within a couple of weeks.

2 thoughts on “How to Control Ammonia in the Chicken Coop”