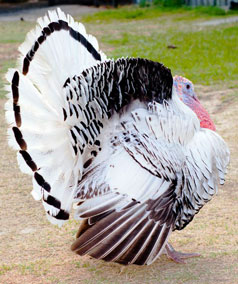 The Royal Palm is a lightweight turkey with stunning white plumage trimmed in black. Turkeys with a similar color pattern have been raised in Europe since the 1700s, known there variously as black-laced white, pied, or Crollwitzer.

The first turkeys in the United States with the palm color pattern appeared in the 1920s in a mixed flock of turkeys on a farm near Lake Worth, Florida. According to The Livestock Conservancy, an anonymous breeder wrote in a 1931 issue of Feathered World magazine: “Turkeys of this type of coloration do crop up by chance where different color varieties are crossed.”

Years of selective breeding went into stabilizing the color and other characteristics. The Royal Palm was finally admitted to the American Poultry Association Standard of Perfection in 1977. These turkeys are considered to be basically exhibition or ornamental birds.

They are active foragers, making them ideal for insect control. They are also excellent flyers — an important consideration in designing facilities for them. They like to roost up off the ground, preferring a perch height of at least two feet.

Royal Palm hens are seasonal layers of large to extra-large eggs with tinted brown-speckled shells. For breeding purposes, one tom can service up to 7 hens. Unlike broad breasted meat turkeys, Royal Palms can breed naturally, and the hens will go broody.

Although Royal Palm turkeys have never been selectively bred for fast growth and heavy muscling, they make a nice holiday alternative for a small family. Young toms weigh around 16 pounds, and young hens weigh about 10 pounds.