Permethrin comes in the form of a dust or spray, and works by paralyzing an insect’s nervous system. Technically it is a sodium channel blocker, the same mechanism that made DDT an effective insecticide. DDT is now banned in the United States because of its human health risks and adverse effects on the environment, while permethrin supposedly poses less risk to the environment and to the health of animals and humans.

Permethrin is included in The World Health Organization’s List of Essential Medicines, a core list of efficacious, safe, and cost–effective medicines needed for a basic health-care system. On the other hand, The Environmental Protection Agency lists permethrin as a likely carcinogen if swallowed. And, because it is a synthetic pesticide, permethrin is not allowed for organic crop and food production.

Permethrin has low toxicity for birds but is toxic to fish and honeybees and highly toxic to cats.

It is an ingredient in shampoo used to effectively treat head lice in humans. It is approved for use in poultry housing, where it is a treatment against lice, mites, ticks, and bedbugs.

No withdrawal period is specified. One study found that the maximum amount of permethrin in poultry meat peaks one day after treatment and in eggs 7 days after treatment, and in both cases gradually diminishes. Traces of permethrin were still detected in egg yolks 21 days following treatment.

When applying permethrin powder to a chicken’s body, avoid getting any on the chicken’s face, especially in its eyes, and avoid breathing it yourself. To apply a powder, put it into a shaker, a baby nasal aspirator, seedling sprayer, or squeeze bottle and puff it into the chicken’s vent fluff.

When applying the powder inside your coop, a lightweight garden duster — such as Dustin-Mizer, Earthway Spritzer, or Pest Pistol — helps get the powder into cracks and crevices. Shoo the chickens outside, wear a dust mask to avoid breathing in the powder, and wear goggles to keep it out of your eyes.

Like any insecticide, permethrin should be handled with care.

Read the label and follow all the stated precautions. Keep children away while the insecticide is being applied, and discourage them from handling chickens for several days afterward. Before applying permethrin, or any insecticide, inside the coop remove or cover feeders and waterers, and gather eggs. Wear gloves and a face mask, and avoid inhaling sprays or dusts. If you get any on yourself, wash your skin and launder your clothing separately from other wash.

Says Jeff Smith of Cackle Hatchery, “The typical first-line treatment for head lice on humans is an over-the-counter shampoo, such as Rid or Nix, both of which contain permethrin. It is also the most common chemical used for control of mites and lice on chickens. I have used it for 45 years in our barns and on chickens and I never had a problem. When correctly used to treat chickens for mites and lice, permethrin is very safe.” 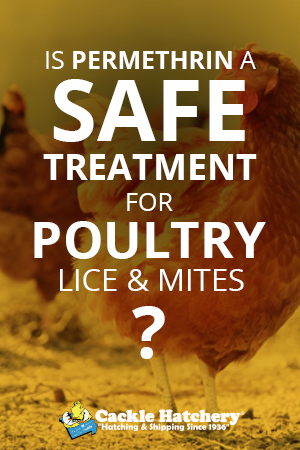 6 thoughts on “Is Permethrin a Safe Treatment for Poultry Lice and Mites?”