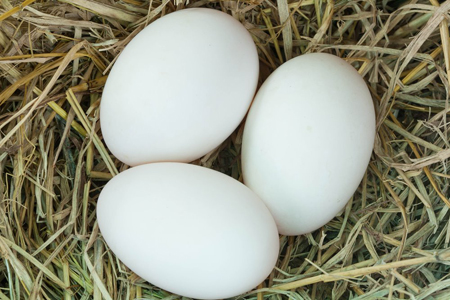 Some breeds of duck have been developed for their outstanding laying habits. Unless this ability is maintained through continued selective breeding, though, the laying potential of the strain will decrease over time. For this reason, not all populations of a particular breed known for laying are equally up to the task. Here are four outstanding layer breeds to consider if you plan on keeping ducks for eggs.

Originating in England, the Ancona is a hardy breed that lays in the range of 210 to 280 eggs per year. The eggs are large to extra large and may be white or cream colored, or sometimes blue. This stocky heritage breed grows rapidly, making it suitable as a meat bird, as well as a layer. It is an excellent forager that likes to remain close to home, has a calm temperament, and doesn’t typically fly. The Anconas’ black and white patchy patternless coat is often compared to that of Holstein cattle.

Developed in Wales, the Harlequin is a lightweight heritage breed that can lay as many as 300 large eggs per year. It is an active forager but lacks a strong sense of self preservation and therefore may need extra protection from predators and inclement weather. It is a calm breed with a body type similar to that of the Campbell duck, from which the Harlequin was developed. The hen’s plumage is creamy white with dark brown spots. The drake’s color pattern is somewhat similar to, though much lighter than, a mallard’s.

The Golden 300 Hybrid is a lightweight layer developed in 1996 as a duck that produces more and larger eggs than the Khaki Campbell, yet is somewhat calmer than the flighty Campbell. Formerly considered to be an outstanding layer, today’s Campbell ducks don’t produce nearly as well as they once did. The Golden 300 Hybrid fills the void as an efficient and consistent layer of white shell, large to extra-large eggs with production ranging from 200 to 290 per year. This hybrid is a sex link — the males are shades of black; the females are shades of brown. The offspring of mating two Golden 300 Hybrids will be a mix of blacks, browns, and yellows.

The White Layer was developed to appeal to customers who prefer ducks with white plumage. This duck is popular among Filipinos and other Americans of Asian descent who enjoy the partially incubated duck egg delicacy called balut. Compared to ducks with darker plumage, white ducks result in an embryo that is lighter in color and therefore more visually appealing. The White Layer produces large to extra-large white eggs, with production ranging from 200 to 290 eggs per year.

A duck generally starts laying early in the spring of her first year. Some begin as early as six months of age and may continue laying nearly year around. Layer ducks typically lay consistently for three years, although some strains may lay efficiently for up to five years. The best layer ducks stop production only briefly during the fall molt.

Gail Damerow is editor and principal author of Backyard Homestead Guide to Raising Farm Animals, which includes a chapter on raising waterfowl.