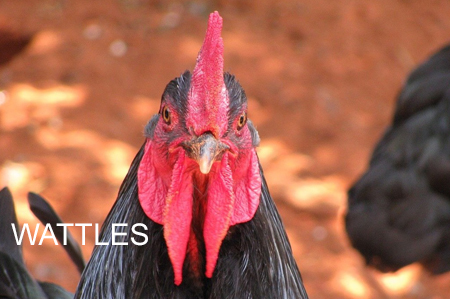 One of the great benefits of keeping chickens is that it gives you an opportunity to expand your vocabulary. The world of chicken keeping is full of odd or potentially confusing words and phrases, like those in this mini glossary of chicken terminology.

Bloom: The moist, protective coating on a freshly laid egg that dries so fast you rarely see it; also called cuticle.

Breed: A group of chickens that are alike and capable of reproducing more of the same.

Class: A group of chickens competing against each other at a show.

Cloaca: The chamber just inside a chicken’s vent where the digestive, reproductive, and excretory tracts come together.

Coccidiostat: A drug used to keep chickens from getting coccidiosis.

Crepuscular: A predator (or other animal) that is most active just before dawn and just after sundown.

Crop: The pouch at the base of a chicken’s neck that bulges with feed after the bird eats.

Crumbles: Chicken feed in the form of crushed pellets.

Dual Purpose: that are suitable for the production of both eggs and meat.

Dust: A chicken’s habit of thrashing around in soft soil or sand to clean its feathers and discourage body parasites.

Flighty: Description of a chicken that is easily excited.

Free choice: Rations available to chickens at all times.

Free Range: The ability of chickens to roam at will.

Frizzle: Having feathers that curl rather than lie flat.

Gizzard: An organ that contains grit for grinding up the grain and plant fiber a chicken eats.

Grit: Sand and small pebbles eaten by a chicken and used by its gizzard to grind up grain and plant fiber.

Hackle: The collective group of feathers growing along the back and sides of the neck; also any single one of those feathers.

Keel: The breastbone, which resembles the keel of a boat.

Mash: Chicken feed that has been ground to various degrees of coarseness so chickens can pick out what they like.

Molt: The shedding and renewing of feathers.

Pellet: Mash that has been compressed into short tubular pieces, each having identical nutritional value.

Pip: The hole a baby chick makes in its shell when it is ready to hatch; also the act of making the hole.

Scratch: The habit chickens have of scraping their claws against the ground to dig up tasty things to eat; also, any grains fed to chickens.

Sexed: Newly hatched chicks that have been sorted into pullets and cockerels.

Spent: Description of a hen that is no longer laying well.

Stag: A cockerel on the brink of sexual maturity, when comb and spurs begin to develop.

Standard: A chicken that conforms to the description of its breed in the American Standard of Perfection.

Started Pullet: A young female chicken that is nearly old enough to lay.

Straight Run: Newly hatched chicks that have not been sexed; also called unsexed or as-hatched.

Strain: Related chickens selectively bred by one person or organization for so long the offspring have become uniform in appearance or production; also called a line.

Stub: Undesirable down on the shank or toe of a clean-leg chicken.

Tidbitting: Repeatedly picking up and dropping a bit of food while making sounds of excitement.

Treading: Rapid movements of a rooster’s feet while mating.

Unthrifty: Unhealthy appearing and/or failing to grow at a normal rate.

Variety: A subdivision of a breed based on color, comb style, beard, or leg feathering.

Vent: The outside opening of the cloaca, through which a chicken emits eggs and droppings.

Wattles: The two red or purplish flaps of flesh that dangle under a chicken’s chin.