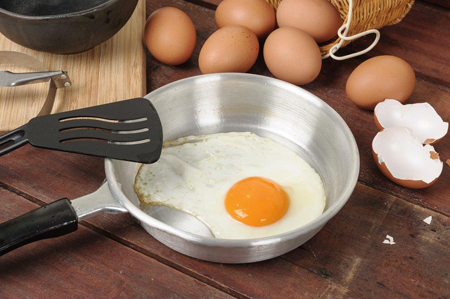 Egg yolks get their golden yellow color from the same plant pigments that result in the skin color of yellow-skin breeds. These pigments are also responsible for beak and bill color in chickens and ducks, and for their brightly colored feathers.

The pigments are of two main types— carotene and xanthophyll. Carotene is orange to red in color. Xanthophyll is yellow. Although some experts find no relationship between yolk color and nutritional value, others have suggested that darker yolks are more nutritious.

The exact color of an egg’s yolk depends on the proportions of carotenes and xanthophyll in the hen’s diet. Here are some examples of the effects of various pigmented feedstuffs on egg yolk color:

Pale yellow yolks occur when hens are fed white corn or receive wheat instead of corn.

Orange to reddish yolks occur in eggs laid by hens pastured on grass or are fed grass meal.

Dark or off-colored yolks can result from excessive amounts of certain pigmented feeds, including clover, cottonseed meal, kale, rape, rye pasture, and some weeds including mustard, pennycress, and shepherd’s purse.

Yolk Color Is Not Uniform

If you look closely, you will notice that a yolk is not of uniform color through-out. Instead it consists of a series of concentric balls. At the center is a ball of white yolk. Surrounding the center are alternating layers of thick dark yolk and thinner white yolk.

Although you might never see it — except maybe in a hard-cooked egg — a neck of white yolk extends from the center to the outer edge of the yolk, flaring out and ending just beneath the blastodisc. That’s the whitish spot on top of the yolk, also known as the germinal disc.

If the egg is fertile, that spot is where chick development begins under incubation. In that case, pigments in the yolk provide antioxidant defenses that protect the embryo during incubation, improving the hatch rate and increasing chick viability after the hatch. So those bright yellow egg yolks are not only appealing to us humans, they’re also beneficial to the chickens.